Sens down Jets 3-2 in NHL pre-season 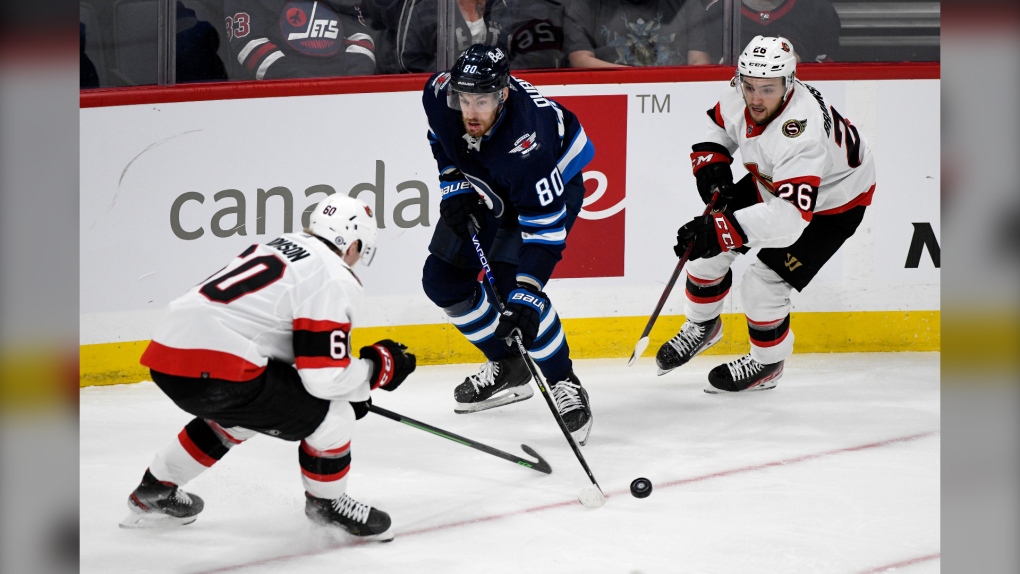 WINNIPEG -- Shane Pinto scored 25 seconds into overtime to lift the Ottawa Senators to a 3-2 victory over the Winnipeg Jets in NHL pre-season action Sunday.

Pinto weaved around the ice before firing the puck low past Jets goalie Eric Comrie.

Ottawa forward Alex Formenton had tied the game 2-2 at 12:17 of the third period with a low shot from inside the circle. Formenton also assisted on Pinto's game-winner.

Anton Forsberg started in Ottawa's net and stopped 17 of the 19 shots he faced in just over 30 minutes of ice time. Filip Gustavsson got his turn and made 14 saves the rest of the way.

Comrie made 24 saves for the Jets.

The Senators opened the scoring in the first with a slick goal by rookie Ridly Greig. The native of Lethbridge, Alta., slid the puck between his skates, kicked it to his stick and then sent a backhand shot past Comrie at 11:30 of the first.

Jets centre Pierre-Luc Dubois replied with a power-play goal with 37 seconds left in the first to make it 1-1, but then had to leave the ice midway through the second because of Greig.

Greig cross-checked Dubois in the face and was handed a game misconduct. The Sens were assessed a five-minute penalty. Dubois returned for the third period.

Jets forward C.J. Suess scored at 2:13 of the second for the 2-1 lead in front of vaccinated and masked fans in attendance at the newly renamed Canada Life Centre.

Winnipeg was dinged for four penalties in the first period, including two in the opening five minutes, but Greig scored at even strength. He was the third of Ottawa's three first-round picks (28th overall) in the 2020 NHL draft.

Ottawa only registered one shot on goal in the middle frame and were outshot 23-15 after 40 minutes.

Winnipeg hosts Edmonton on Wednesday, while Ottawa is home to Toronto on the same night.