Snow globes, beach sand and Christmas presents: what you can and can't bring on flights during the holidays 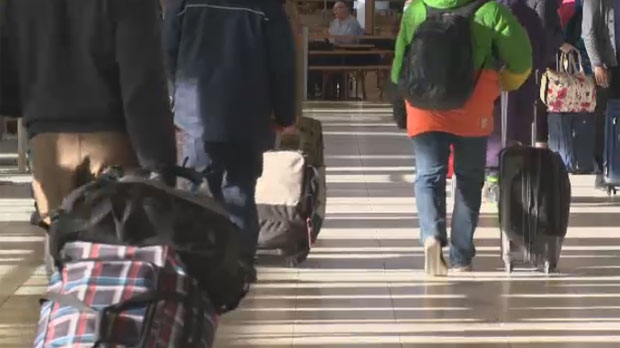 Historically, the busiest day of travel at Winnipeg's airport is Dec. 23.

WINNIPEG -- As the holidays get closer thousands are expected to make their way to Winnipeg James Armstrong Richardson International Airport.

It’s estimated up to 16,000 travellers will head to the airport daily during the peak time of December 20 to the 23.

So with the increase in travellers, people are being reminded of what they can and can’t bring when packing a carrying on.

Liquids and gels are limited 100mL, which means people shouldn’t try to bring a snowglobe on the plane.

Organic materials are also not allowed in your carry-on luggage, so keep the sand on the beach.

“Before the holidays as well, we want to remind people to wrap their gifts after the checkpoint,” said Christine Langlois with the Canadian Air Transport Security Authority. “As much as we love unwrapping gifts ourselves, we much prefer not to unwrap yours, and we want to keep things smooth at the checkpoint and make sure everything goes as fast as possible, and we might have to open it depending on what may be inside.”

The airport does have a free wrapping station set up on the other side of security which includes tape and wrapping paper.

Travellers are advised to arrive at least an hour in advance of domestic flights and an hour and a half early for international destinations.