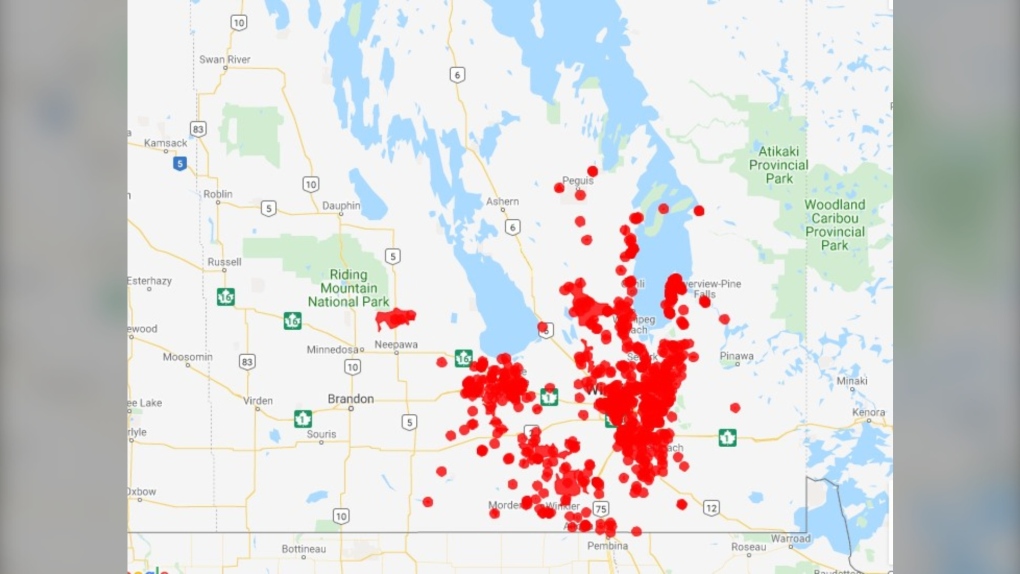 WINNIPEG -- Manitoba Hydro reported Friday at 11 a.m. that more than 36,000 customers are without power across the province due to a winter storm causing tree branches to fall on powerlines.

Powell said the utility is bringing in crews from areas unaffected by the storm, but that difficult travel conditions are slowing the response times.

"As of this morning, we are no longer able to provide estimated times for restoration on our outages due to the extremely high volume of calls we are receiving and the continuing deterioration of weather and roads. We appreciate everyone's patience as we work through thousands of no power calls," Powell said.

More than 22,000 Winnipeg customers are affected, with about another 4,000 without electricity in the rural municipalities of Springfield and East St. Paul.

Powell reminds the public to stay away from downed powerlines and to report them to 911 as soon as possible.

Downed lines can pose considerable danger as they may still be energized. .

Additionally, many Winnipeg area schools are without power this morning.

These schools remain open, however, student attendance is at parental discretion.

A busy time for firefighters

The union representing firefighters in Winnipeg said Thursday going on to Friday crews faced one of their busiest shifts in years.

For the most part, he said, crews supported calls for cases of downed trees on wires.

“At one time we had almost every fire truck out for service,” he told CTV News in a phone call.

WFD crews are exhausted after facing the busiest shift in years. This serious winter storm resulted in over 100 calls for service across the city for weather related incidents, and several structure fires. Firefighters are gearing up for another busy shift. #NeverOffDuty pic.twitter.com/IgFMzSYsev