Support for Manitoba PCs has slipped since last election, NDP holds the lead

Support for Manitoba PCs has slipped since last election, NDP holds the lead 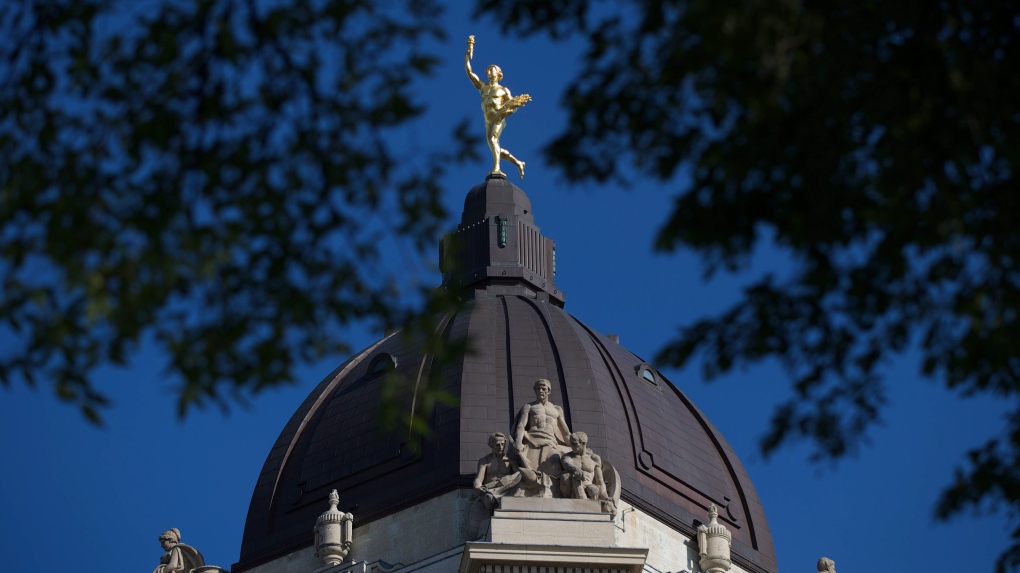 The Golden Boy stands on top of the dome of the Manitoba Legislature in Winnipeg, Saturday, August 30, 2014. (THE CANADIAN PRESS/John Woods)

It has been three years since the governing Progressive Conservative party was re-elected in Manitoba, but new data shows support for the party has slipped as more Manitobans look to the NDP.

A new Probe Research poll, commissioned by CTV News Winnipeg and the Winnipeg Free Press, says during the September 2019 election, 47 per cent of respondents had said they would vote for a PC candidate.

Three years later that support has dropped by around 10 percentage points to 37 per cent, according to the most recent poll. 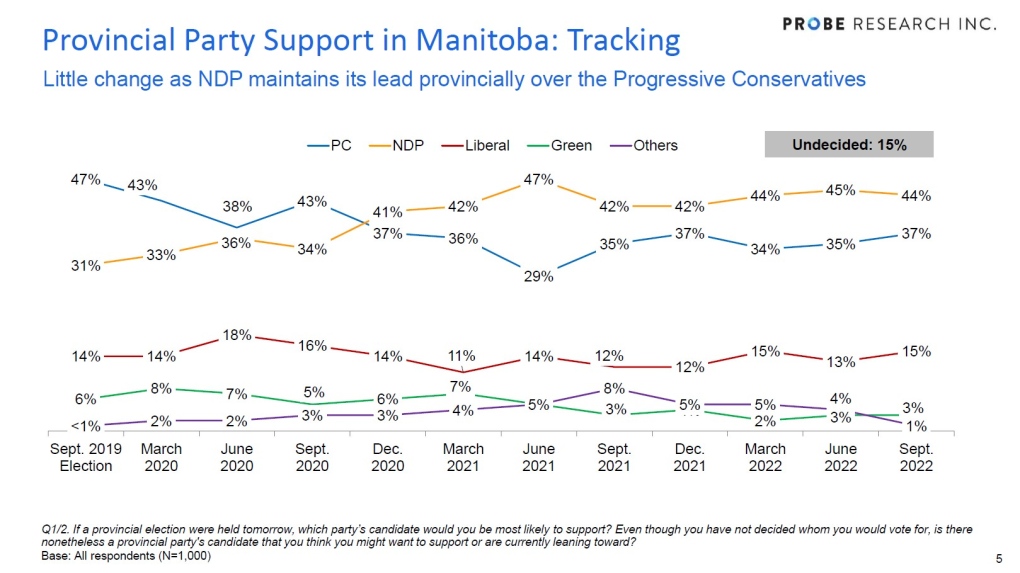 Scott MacKay, president of Probe Research, told CTV News in the years since Brian Pallister's PC government was re-elected a lot has changed—namely there was a pandemic.

"Those were pretty dark days for lots of governments," MacKay told CTV News. "They sustained a lot of political damage during that time and it seems that Manitobans have not shifted back, even though the pandemic might be mostly in the rearview mirror now.

The damage seems to have been done there."

NDP SUPPORT HAS GROWN IN WINNIPEG SINCE LAST ELECTION

In recent months, little has changed in terms of the support for the NDP and the PC parties – with more than half of Winnipeg respondents preferring the NDP over the Tories.

That has changed in the three years since. The most recent polling shows 52 per cent prefer the NDP in the city, while just 25 per cent would vote for a PC candidate.

Probe Research tells CTV News the NDP support in Winnipeg has not moved for the past three surveys in March, June and September. 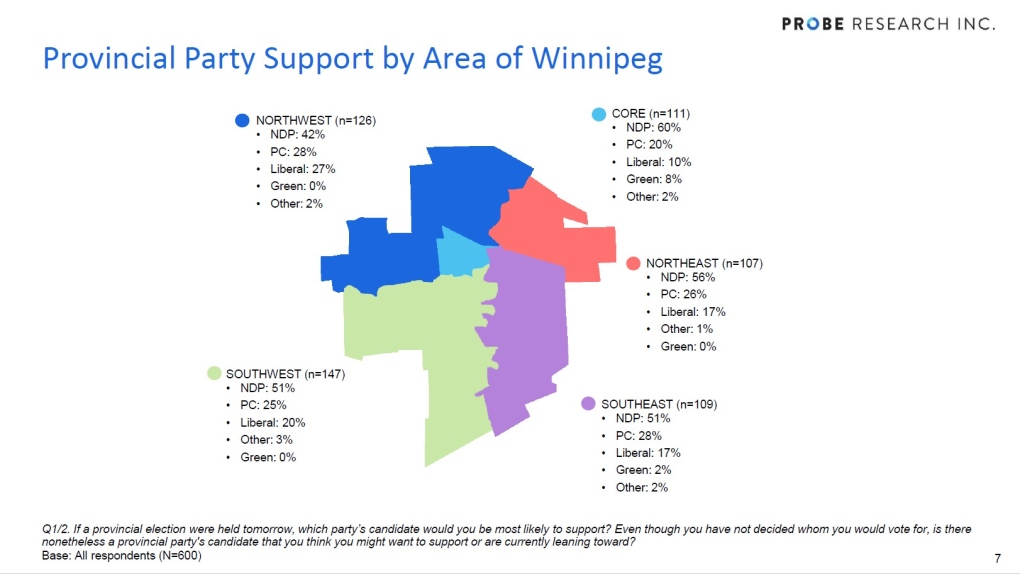 Outside Manitoba's largest city is where the PCs find their base. Fifty-five per cent of decided or leaning voters outside Winnipeg remain partial to the PCs. That is compared to 31 per cent outside of Winnipeg who would vote for the NDP.

The poll also paints a picture of who is voting for these parities.

"There is a clear gender gap apparent in terms of party support in Manitoba," Probe Research said in its key findings.

The poll shows male voters tend to favour the PC party, with 46 per cent saying they would vote for a conservative candidate. That is compared to 34 per cent of men who would vote NDP.

Women, the poll shows, remain with the NDP, with 53 per cent saying they would support the NDP and 27 per cent said they would favour the PCs.

"We have this almost household level polarization going on that I'm sure will make some very interesting dinner conversations as we get closer to the election," MacKay said. 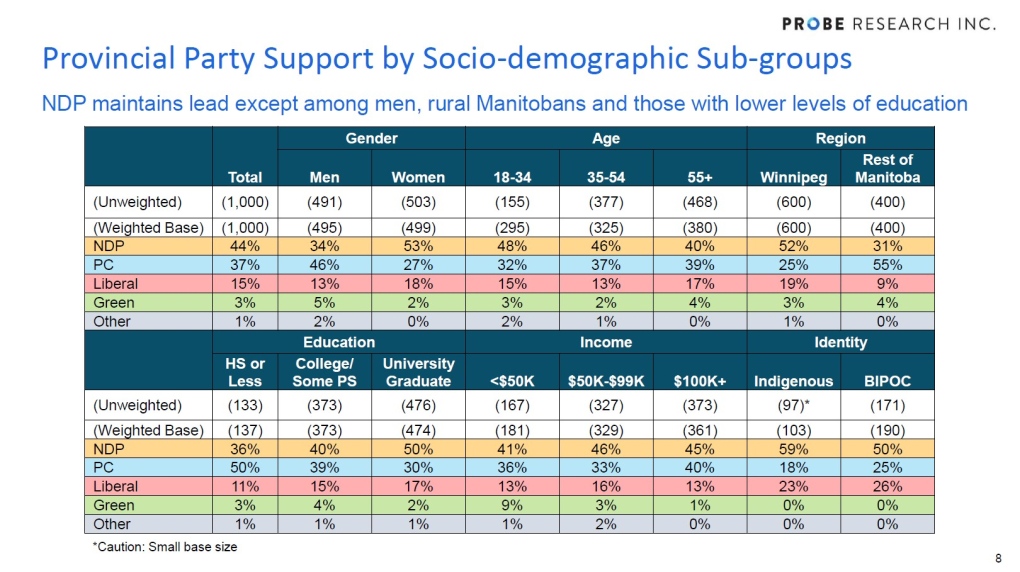 The next provincial election is a little more than a year away, slated for Oct. 3, 2023. MacKay said if the numbers are likely to change, the numbers will start to show that as people head back to work after summer vacations and begin to pay more attention to politics.

"We shouldn't forget though that we've had a lot of New Democratic governments over the years, including one recent reign that was 16 years, I believe," he said. "In some ways, the NDP are almost the natural governing party, if you want to look at it that way, of Manitoba."

As for why Manitobans are getting out to vote, most say they are motivated to elect a party they think is deserving, rather than to vote out a party they oppose. The poll shows three in ten respondents cast a ballot to do both.

Probe Research made these findings as a result of a survey of a random representative sample of 1,000 adults in Manitoba between Sept. 8 to 18. Probe Research said the results, with 95 per cent certainty, have a margin of error of +/- 3.1 percentage points, however that margin of error is higher within the survey's population subgroups.

The head of Ukraine's state-run nuclear energy firm said on Sunday there were signs that Russian forces might be preparing to leave the vast Zaporizhzhia nuclear power plant which they seized in March soon after their invasion.

A peer reviewed study assessing over 800 elderly women has found that flavonoids -- a naturally occurring substance found in beverages such as black and green tea -- could lead to notable health benefits.

Edmonton transit drivers are sharing images of what they are seeing on buses and the LRT on a sometimes daily basis in the hopes it will push the city to hire more transit peace officers.

The federal government has unveiled its long-awaited Indo-Pacific Strategy, which details a decade of plans for investment and partnerships in the region, and signals a tougher stance on China going forward.

Federal Health Minister Jean-Yves Duclos says the previously announced one million units of imported kids' pain relievers are starting to arrive on pharmacy shelves, while an additional 500,000 units have been ordered and are expected over the next few weeks.