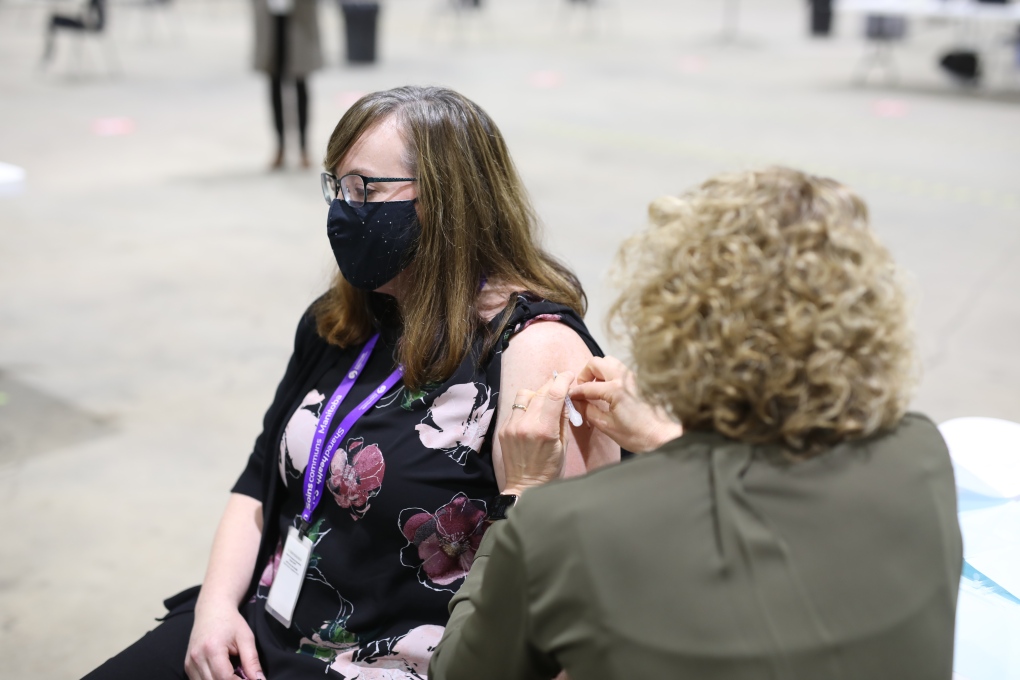 Jennifer Cochrane, a Public Health Nurse with Prairie Mountain Health in Virden, administers the COVID-19 vaccine to Kirsten Boyce, a cytotechnologist with Westman Regional Laboratory, during the first day of immunizations at the Brandon COVID-19 vaccination supersite at the Keystone Centre on Monday (Jan. 18, 2021). (Tim Smith/The Brandon Sun/POOL)

WINNIPEG -- The province announced on Wednesday that a new online dashboard is up and running to help provide the most up-to-date information regarding the COVID-19 vaccine.

Manitobans will be able to see the percentage of people 18 years of age or older who have been vaccinated, immunization plans for the next 28 days, and stats on the age, sex, and region of residence of those vaccinated.

Dr. Joss Reimer, medical officer of health and the head of Manitoba’s Vaccination Task Force, said while there will be data for Manitobans, there will be limitations as well.

She used isolated communities as an example.

“Some of our smaller teams that go into these small communities may be working in locations where there is no internet access. So rather than being able to directly enter data at the point of administration into our computer system, they instead have to collect that separately and send it to our data analysis after the fact,” said Reimer.

She said it is more important to get the vaccine into people’s arms first before getting the data, so this could lead to delays of several days.

Since the vaccine has arrived in Manitoba, 20,265 doses have been administered, including 2,145 second doses. 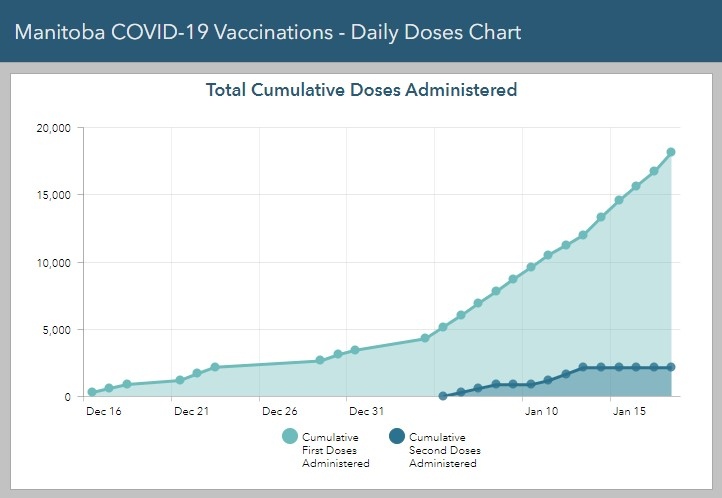 The province also provided an update on the Keystone Centre supersite in Brandon. The site opened on Jan. 18 and so far, 563 doses have been given.

Reimer said she has heard good news from staff at the site.

“The site has been providing immunizations in a very efficient manner and we have been hearing that things have been going quite smoothly,” said Reimer.

Manitoba has also been able to hire almost 1,100 people to work at both supersites in Brandon and Winnipeg.

In Winnipeg, the RBC Convention Centre supersite has administered 14,022 doses of the vaccine and it is averaging 935 doses a day.

Appointment bookings are full for the convention centre, but eligible people can still book a spot at the Brandon supersite.

Reimer is calling this the largest vaccine campaign that the province has ever done and because of that, the supersites have the ability to expand quite a bit.

“We have done things in a way that is extremely fast but also safe. We wanted this to be done so Manitobans could feel secure.” 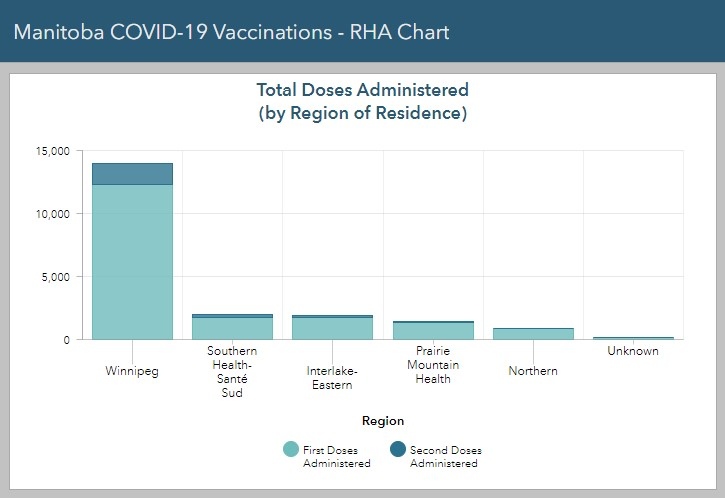 Reimer once again addressed the Pfizer vaccine shortage that is hitting Canada and Manitoba.

She said because of the shortage, the province will not be receiving as many doses as first expected.

Reimer said Manitoba was originally supposed to receive 18,728 doses by the end of the month and that has now been changed to 9,360. No new doses are expected next week.

“Based on our planning, at this time, we can continue to book a limited number of appointments and we so far have not had to cancel any appointments that have already been scheduled,” said Reimer.

She added if no other vaccine comes in, the province will use up all of its Pfizer supply by Feb. 7.

“If that does happen, we will then need to look at cancelling first and second dose appointments at supersites,” Reimer said.

“We have to plan for the worst-case scenarios and we will keep Manitobans updated as we learn more.”

The province noted that real-time data isn’t available for care homes, but the latest information shows 1,067 residents have been given the vaccine.

Officials are also expecting that all residents will receive their first vaccine by the end of January, which is considered ahead of schedule.

“Every consenting resident in Manitoba personal care homes will be eligible to receive their second dose as well,” the province said in a release.

Reimer was asked when seniors outside of care homes would get their chance at the vaccine. She said the delay with the Pfizer vaccine has put a wrench in their plans, but seniors in Manitoba continue to be a top priority and the vaccine will become available to them when more supply arrives.