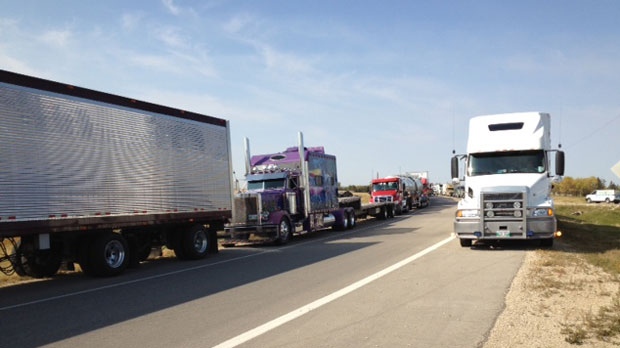 Trucks converge on the Perimeter Highway to raise money for Special Olympics Manitoba in 2012.
WINNIPEG -

The Governments of Canada and Manitoba announced on Tuesday that they will be providing $17 million in joint funding to improve three provincial highways and roads in rural Manitoba.

“Rural and northern communities are an integral part of our country, and they have been impacted by COVID-19 in unprecedented ways,” said Terry Duguid, parliamentary secretary to the minister of economic development and official languages and to the minister of environment and climate change, in a news release.

“Thanks to a federal funding of over $8.5 million, the three highway projects we’re announcing today will create jobs, improve road safety, facilitate the transportation of goods and services, and build stronger, more connected communities.”

One of the projects the governments are investing in is a bituminous rehabilitation project south of Snow Lake, which will restore about 26 kilometres of PTH 39 from PR 392 eastward. The governments will each provide more than $3.9 million to this project.

The funding will also help to upgrade over 10 kilometres of PR 280 near Thompson. These improvements will help to meet current and future traffic volumes surrounding Gillam, Sundance and Split Lake. Both the federal government and the province will contribute more than $2.4 million to this road upgrade.

The third project that will be benefit from the funding is 24 kilometres of bituminous road restoration south of Duck Bay. This road will be restored through the addition of a thin lift overlay of bituminous pavement on PTH 20 between PR 271 and 272. Both levels of government will be investing more than $2 million into this restoration.

In total, the Governments of Canada and Manitoba will each be contributing more than $8.5 million under the rural and northern communities infrastructure stream of the Investing in Canada Infrastructure Program.

“For rural and northern areas particularly, roadways are relied on heavily for access to goods, services and their neighbouring communities. This announcement continues to reinforce the Province of Manitoba’s commitment to investing in safe roadways and creating economic growth in our northern communities.”

A rescue operation underway for 39 people stuck underground at Vale's Totten Mine in Sudbury, Ont., has successfully retrieved 33 miners. A team of doctors is on-site and checking workers as they emerge from underground.

With the rise in popularity of QR codes at restaurants and other businesses during the pandemic, privacy and cyber security experts are urging Canadians to be cautious in their use of the technology.

More than 80 per cent of eligible Canadians over the age of 12 have been fully vaccinated against COVID-19, according to CTV News' coronavirus vaccination tracker.

No grace period for vaccine certificates for Ontario businesses, no enforcement either

Ontario's proof-of-vaccination program doesn't have an official grace period, according to officials with the Ministry of Labour, making it unclear how or when the new rules will be enforced by the province.

OPEC: Oil will be world's No. 1 energy source for decades

While acknowledging the inevitable advance of alternative energy sources and technology, OPEC said that oil will be dominate energy source for decades to come as crude prices reached three-year highs Tuesday.

The FBI-led search for Gabby Petito's fiance is scaling back but becoming more targeted on intelligence, police say

The FBI is scaling back its search for Gabby Petito's fiance, Brian Laundrie, to be more targeted based on intelligence after officials spent more than 10 days combing through a 25,000-acre nature reserve, police in North Point, Florida, said Monday.