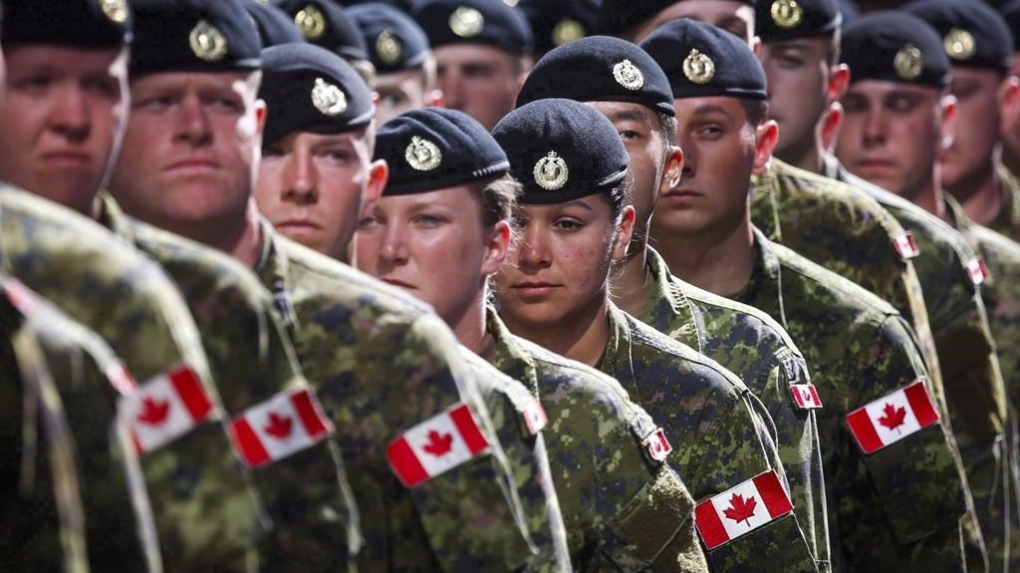 Members of the Canadian Armed Forces march during the Calgary Stampede parade in Calgary, Friday, July 8, 2016. THE CANADIAN PRESS/Jeff McIntosh

OTTAWA -- The military "did not miss" a Manitoba reservist's alleged links to a neo-Nazi group, but in fact first started looking into it months before media reports on the subject began to surface, Canada's top general said Thursday.

Defence chief Gen. Jonathan Vance was speaking out for the first time about Master Cpl. Patrik Mathews, whose case has raised questions about whether the military is doing enough to address hate and right-wing extremism in the ranks.

He promised to be more active in rooting out such behaviour and beliefs from the military ranks, and issued a stern warning to those hoping to use the Canadian Forces as a training ground or avenue to spread their "vile ideology."

"We're a serious institution that does serious things to protect Canadians, to protect this country, to protect our way of life," Vance said following a ceremony to install the military's new chief of personnel.

"We are not a place for sick hobbyists to practice their vile ideology. And we won't stand for it. We will react and where we can be proactive, we will be. But I assure you, we will react."

The combat engineer with the 38 Canadian Brigade Group in Winnipeg first met with his commanding officers in April to discuss "his utterances," Vance said without providing further details. On Monday, the Winnipeg Free Press published a story linking the reservist to a neo-Nazi group.

Following that meeting, Mathews applied to leave the Forces even as military officials launched a formal investigation into his activities -- a probe Vance said was underway in July, weeks before the Free Press story was published.

"The Canadian Forces national counter-intelligence unit had already begun to deal with him by the time that story broke," he said. "I'm happy to say we didn't miss the signal."

Mathews has not been arrested or charged with any crime, and Vance isn't providing further details, citing privacy laws and the ongoing investigation.

The RCMP are reportedly conducting their own investigation, but have only said that they raided a house in Beausejour, Man., on Monday and seized a number of weapons.