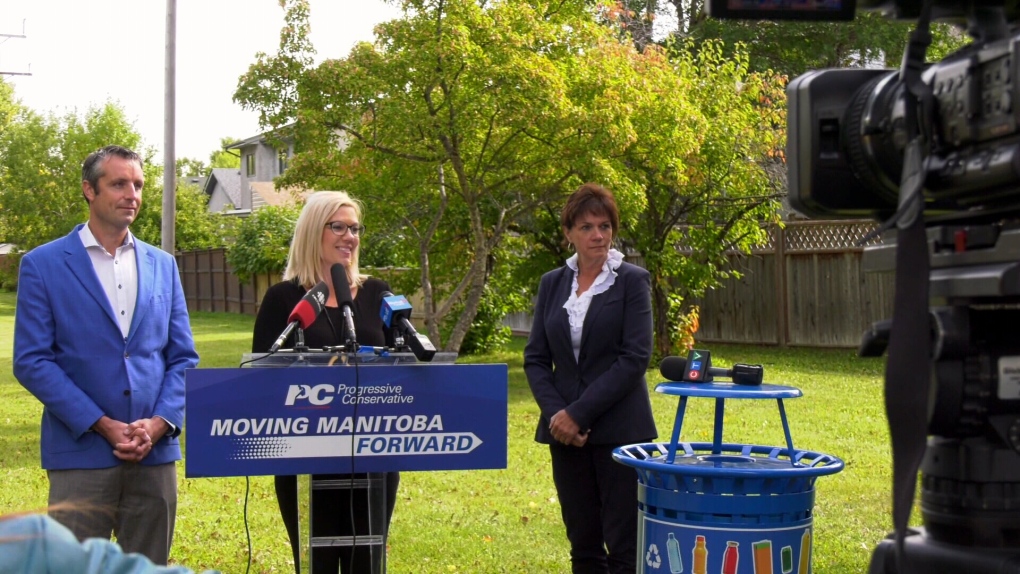 Tory candidate Rochelle Squires, who was minister for sustainable development, said her party will expand recycling programs to include organic waste if re-elected to a second term. She also promised to ban all recyclable material from garbage dumps.

"There would be checks at the Brady landfill (in Winnipeg) and other landfills to ensure that banned products are not entering the landfill," Squires told reporters.

Opinion polls throughout the last several months have suggested the Tories have a sizable lead in public support across the province, but the race with the NDP in Winnipeg -- where most legislature seats are --has registered as very close.

NDP Leader Wab Kinew rallied party troops in the northwest quadrant of the city, where the New Democrats already hold most seats. Speaking to more than 150 supporters outside a community centre, Kinew reiterated promises to reverse some of the Tory government's health care reforms.

Kinew said the fact that he held his event in a traditional NDP area is not a sign that he is playing defence.

"This is about rallying the troops, this is about lifting the spirits of all our great volunteers in this part of the city," Kinew said, adding he hoped the NDP strength in the area might spill over into other constituencies.

The Liberals, who held four of the 57 legislature seats when the election was called, focused on education promises Saturday.

Liberal Leader Dougald Lamont said he would ensure children across the province are screened for learning disabilities and other psychological issues before they start Grade 1. A Liberal government would also boost literacy programs and ensure all schools have proper equipment and classrooms to teach trades, Lamont said.

The Liberals are the only major party to not yet release a costed platform for the election. The party has indicated the document may be released Sunday.