'We are completely on hold': The Manitoba employment sectors hit hardest by COVID-19

WINNIPEG -- More than one million Canadians have lost their jobs since the start of the pandemic, according to new numbers released Thursday morning by Statistics Canada.

In Manitoba, the impact hasn’t been quite as severe as in other provinces but many have found themselves trying to steer through these turbulent times.

Wilderness outfitters are among those navigating uncharted waters amid the global pandemic.

COVID-19 has forced guides like Pauline Nadlersmith, who lives in the Turtle Mountains near Boissevain, Man., to rapidly change course.

“We are completely on hold,” said Nadlersmith. “We were starting to fill our trips and we’ve had to completely refrain from doing that.”

Nadlersmith and her son run guided lake and river canoe trips. Spring is usually when the paddling season ramps up. Public health measures and physical distancing strategies have prompted her to press pause — not an easy choice, given it’s her main source of income this time of year.

“This is a small sacrifice and a short sacrifice, hopefully for bigger things,” she said. “We actually can’t sort of gauge our loss for this year yet because our income will be primarily all throughout the paddling season.”

“We also feel it’s our responsibility to not be out on the water and out in the wilderness right now, promoting trips. We don’t want to put that out there. I feel it would be irresponsible."

Recreation is just one of the sectors hit hard by the pandemic since measures were put in place to contain the spread of COVID-19.

“The rapidity of the sudden turnabout in the job market and the larger economy is I think unprecedented, we haven’t seen anything like that,” said University of Manitoba economics professor Fletcher Baragar.

The Statistics Canada data shows Manitoba lost 25,300 jobs in March, a decline of 3.8 per cent compared to February. 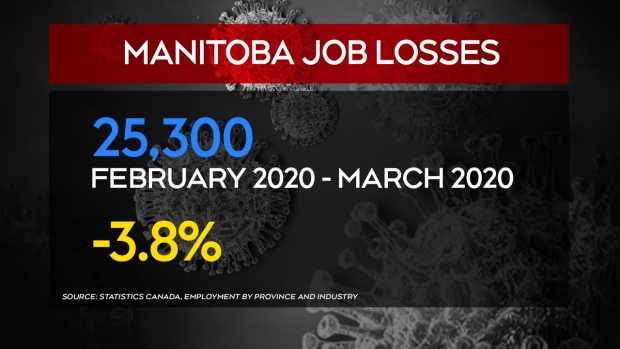 Manitoba’s accommodation and food services sector suffered the biggest month-over-month decline with a 15.6 per cent reduction in jobs. It was followed by a 12.4 per cent decline in information, culture, and recreation and 6.1 per cent in wholesale and retail trade. 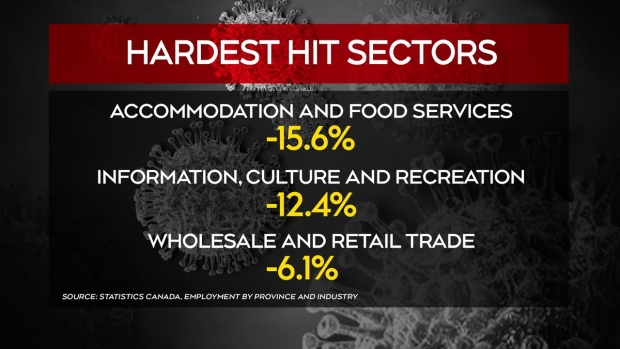 At 6.4 per cent, the province’s unemployment rate is currently the lowest in all of Canada but was already among the lowest prior to the pandemic.

“It’s not surprising that we still have the lowest unemployment rate,” said Baragar. “Also, it seems like the full impact of the virus hasn’t hit Manitoba as forcefully or as broadly yet.”

Baragar said the latest numbers only provide a snapshot and don’t capture the full scope of the coronavirus crisis on the economy.

“A lot of workers who are still working have had big reductions in the number of hours in which they’re working as well so that will show up in terms of output in GDP which will contribute to GDP losses,” he said.

Nadlersmith isn’t sure what all of this means for her livelihood.

She isn’t sure if she qualifies for any emergency financial assistance and doesn’t know yet if she’ll be able to salvage any of the paddling season.

Statistics Canada's findings suggest the increase in unemployment was mainly due to temporary layoffs, meaning some workers expect to return to their jobs within six months.