'We’re all in this together': Winnipeg man shares experiences on frontlines of London’s COVID-19 fight 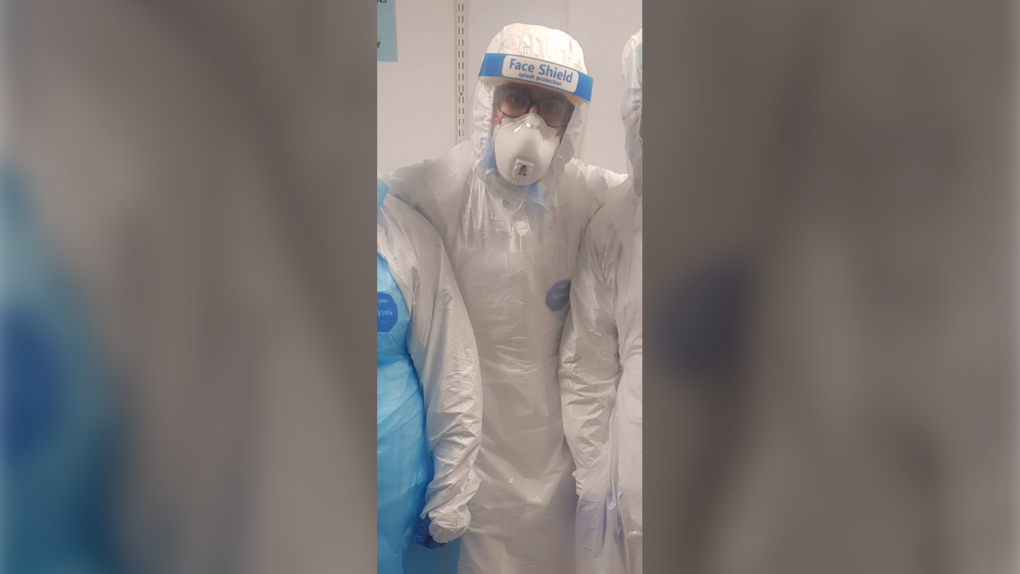 Nelson Bettencourt is seen prior to the start of a shift as a cleaner in London in full personal protective equipment. (Submitted photo)

WINNIPEG -- A Winnipeg man has seen firsthand the impact COVID-19 is having on the health care system in the United Kingdom.

Nelson Bettencourt is currently living in London and recently finished his first week as a cleaner with the National Health Service (NHS).

“We’re all in this together as a unit combating this invisible enemy,” he told CTV News via Skype on Thursday.

Bettencourt, who also works as an actor, took the job in London after work in Canada was cancelled due to the COVID-19.

“When I got on board, they were like ‘how much can you work? And how much are you willing to work?’” he said. “I said I’ll work whatever you need.”

In his first few days, he started shadowing other team members, working in the intensive care unit.

“I was trying to focus on learning from my advisor and learning how to do the job properly, but it was really hard to see how it was affecting people in such a negative aspect,” he said. “Because, you hear the numbers, the amount of deaths, you hear the amount of people it’s affecting, but when you really see it, and what it’s doing, that is when- at least for me- it hit in a whole different way that I didn’t expect.”

READ MORE: 'You aren’t in this alone': Manitoba premier gets emotional while talking about pandemic

If Bettencourt is working in a unit where patients with COVID-19 are, he is wearing full personal protective equipment.

“I’ll have no skin exposed, except for just space for my eyes to see, but I still have a face shield in front of that,” he said.

Seeing the impact up close made Bettencourt wish more people would take the virus seriously. He said when out shopping for groceries on his day off, he still saw people in parks not following guidelines.

“It’s really hard for me to not want to get involved and be like ‘Do you know what you’re doing to spread the disease and put people in harm?’” he said. “Maybe it’s not you, and maybe it’s not someone you know, but it could be your friend’s grandmother, or it could be your brother. You just never know who it’s going to hit.”

Bettencourt said he is proud of the work doctors, nurses and all hospital staff are doing, and said cleaners at hospitals also need to be recognized for their work in the fight against COVID-19.

“We provide a clean working environment for them to work in,” he said. “Initially, when I was going into this, I said ‘I’m just a cleaner, I’m just a cleaner,’ but I saw the work that they were doing, and I found out that this role was more vital than I think I gave it credit for before doing, and I’m so glad to be doing it now. I know I’m taking out garbage, I’m picking up garbage, I’m sweeping and mopping and cleaning surfaces, and I know what I’m doing is important to the hospital as a cog in its machine.”