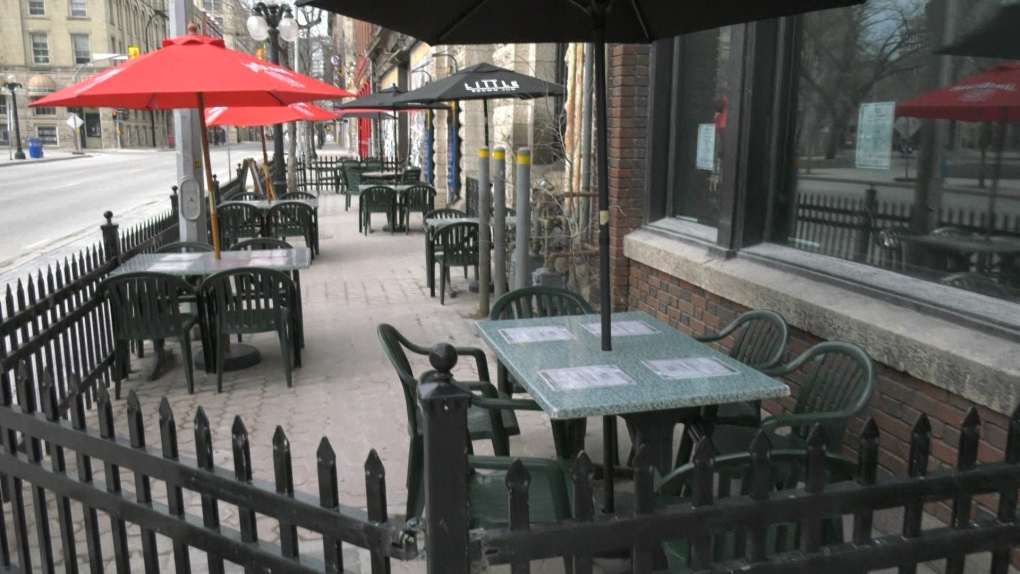 A file image of the patio at the King's Head Pub

The new orders – which come into effect on Wednesday – restrict indoor and outdoor gatherings at households, but does allow four people from different households to meet on a restaurant patio.

Roussin said the decision has a lot to do with messaging and where transmission is happening right now.

"If we had outdoor groups of say 10 for private residences, it wouldn't be unusual to see three cars in someone's driveway, because they could have 10 people in their backyard."

He said because transmission is happening in uncontrolled areas, public health wants people to stay home and have no visitors with rare exceptions.

“If you do gather with people, you're going to gather outdoors,” he said, adding patios limit those gatherings. “They're also controlled, they’re distanced. So, you know right now that's where we're focusing on - is where we see a lot of the transmission and that's in private residences."

Jon Holeman and Kerry Renaud were out for lunch on Tuesday on a Corydon Avenue patio. The two men said they think the new restrictions have inconsistencies.

“I think everything is cool with the patio – four people on the patio, etcetera, etcetera,” Holeman said.

“I think it is sort of silly that I can meet my family member at a park, I can meet them at a patio, but I can’t have them in my backyard and do whatever.”

“This is uncharted territory – it really is,” Renaud said. "We are making the rules up as we go and unfortunately the rules are reactionary. It’s not like we have a blueprint to figure this thing out."

Both the men said they will be following the new public health rules as they have been doing for the course of the pandemic.

Epidemiologist Cynthia Carr, founder of EPI Research Inc., said research shows outdoors is safer, but still 10 per cent of cases are contracted outdoors according to a recent study.

“My understanding is that, because we are in a very precarious situation in trying to control the escalation of cases while still considering economic and social wellbeing, there has been a decision made to allow for very small groups of people to get together within a business situation outdoors, but that can be monitored,” Carr said.

Carr said people going to a restaurant need to give their names for contact tracing, and there is monitoring of how long people are together at a table. She said on top of this, people still have to comply with masking requirements when not at the table.

“That’s a lot of responsibility to put on businesses, and unfortunately right now the decision has been made that we’ve just got to really tighten down and not leave it up to people to perhaps end up with more than four people together,” she said.

Carr said even when you are outdoors, the highest-risk setting is when people are in face-to-face conversations for 15 minutes or more.

“Certainly, a person wouldn’t say that outdoors in the backyard and outdoors on a patio at a restaurant in-and-of-itself related to the environment is any different," she said.

"It’s really related to the ability to contact trace and to control the number of people that are in a group setting, which right now we just have to get on top of because this virus transmits through human interaction and unfortunately we just have minimize that as much as possible.”