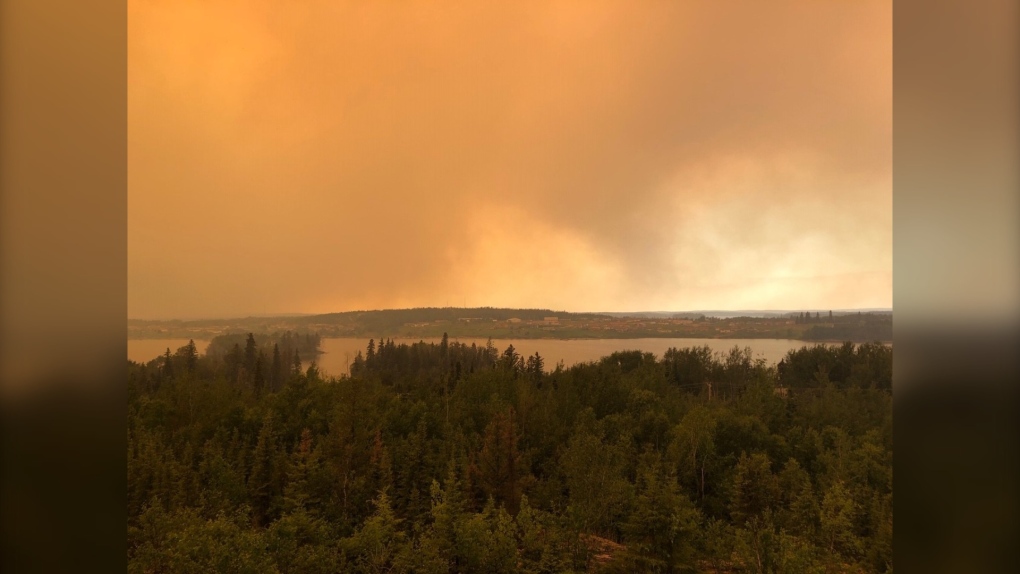 A fire burns near Pukatawagan, Manitoba shortly after 1 p.m. on July 14, 2022. An evacuation order was issued for the community (Photo courtesy Ralph Caribou).

The Manitoba Wildfire Service (MWS) says danger levels are low to moderate this week as three large fires continue to burn in our province.

There are currently 32 fires burning across Manitoba according to the MWS, with seven new fire starts in the past 24 hours.

One is located about 37 kilometres north of Flin Flon along the Saskatchewan-Manitoba border, and is estimated to be around 2,300 hectares in size. Manitoba fire crews are working with crews from Saskatchewan to extinguish it.

The service said wind conditions over the next few days may produce increased smoke activity in Flin Flon. Local fire crews are focusing on protecting several remote properties in the area.

Meanwhile, another fire is located about a seven hour drive northwest of Winnipeg at Burntwood Lake. Officials say it is around 24,000 hectares in area, but is not an immediate threat to any community or properties.

The largest wildfire is now approximately 52,760 hectares in size. That blaze caused the evacuation of nearby Mathias Colomb Cree Nation (MCCN) last month.

Officials say that firefighting efforts and good weather conditions in the area have decreased the risk to the community and critical infrastructure, and some community members are now beginning to return home.

Manitobans are reminded to practice fire safety, and to check local fire restrictions as many municipalities have implemented "no-burn" policies.

Health Canada says Canadians ages 12 and up can now be given the Pfizer-BioNTech COVID-19 booster vaccine that targets the BA.4 and BA.5 strains of the Omicron variant.

Putin's path: from pledges of stability to nuclear threats

As he turns 70 on Friday, Russian President Vladimir Putin finds himself in the eye of a storm of his own making: His army is suffering humiliating defeats in Ukraine. Hundreds of thousands of Russians are fleeing his mobilization order, and his top lieutenants are publicly insulting military leaders.

September jobless rate falls to 5.2 per cent as fewer Canadians look for work