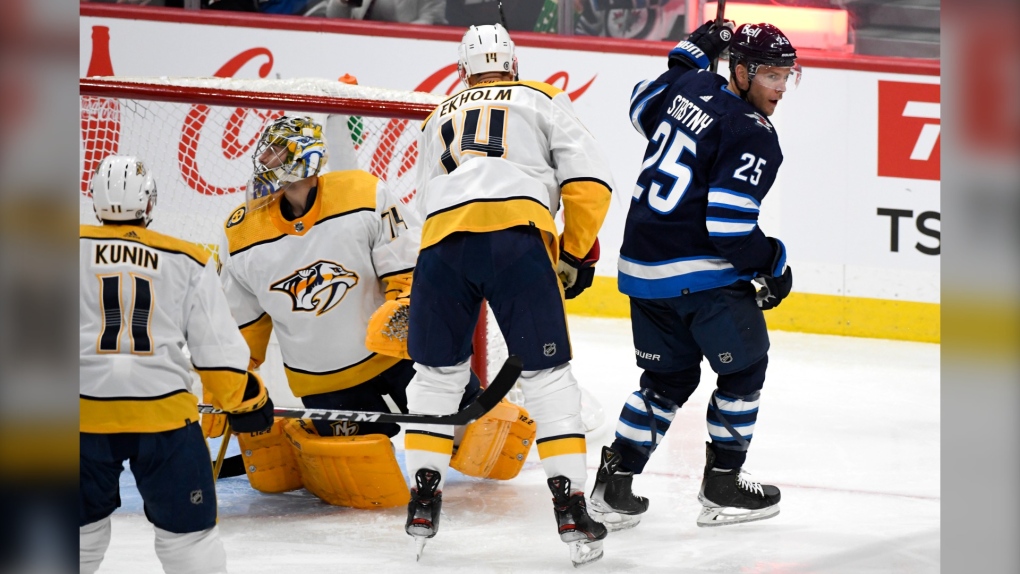 Veteran centre Paul Stastny scored two goals to lead Winnipeg to a 6-4 victory over the Nashville Predators at the Canada Life Centre on Saturday -- but the Jets had to hang on to get the job done.

Just 26 seconds after Nashville defenceman Roman Josi pulled the Predators to within 4-3 at 3:10 of the third period, Stastny scored his second of the game to restore the two-goal lead when he deflected a Neal Pionk point shot past Nashville goaltender Juuse Saros.

Winnipeg's red-hot forward Kyle Connor then increased the lead to 6-3 on the power play. But the Predators responded when Philip Tomasino scored with the man advantage to pull within 6-4 with 6:19 left to play. Nick Cousins and Trevor Novak assisted.

With Saros pulled, the Preds stormed the Winnipeg net.

Saros made 23 saves on 29 shots while Winnipeg goalie Connor Hellebuyck stopped 26-of-30 shots.

Winnipeg improved to 2-2-1 with their second straight win. The Predators fell to 1-4-0.

It was the Predators' only visit to Winnipeg this season.

Nashville pulled to within 3-2 on a second-period power play. Cousins backhanded a shot past Hellebuyck on a scramble in front of the netminder. Novak and Tomasino assisted.

Winnipeg took a 3-1 lead with goals just 1:23 apart early in the second period. First, Dubois deflected a point shot by Schmidt past Saros at 1:11. Then, Stastny pounced on a Connor rebound and fired it into the net for a power-play goal.

Earlier, Jets centre Adam Lowry knotted the score at 1-1 when he was sent in alone on Saros by defenceman Dylan DeMelo. Lowry slid a backhand underneath Saros at 2:42 of the first period.

The Predators drew first blood just 1:15 into the contest. Centre Colton Sissons, who was unchecked on the open side of the Jets net, converted a pass from forward Tanner Jeannot. Hellebuyck had no chance.

The Jets played without both No. 1 centre Mark Scheifele and captain Blake Wheeler for the second straight match. Both are in NHL COVID-19 protocol.

The Jets will head back to California for a three-game road trip. They play the Ducks in Anaheim for the third time in six games on Tuesday.

The Predators will play the Wild in Minnesota on Sunday, the second of a two-game road trip, then return home.