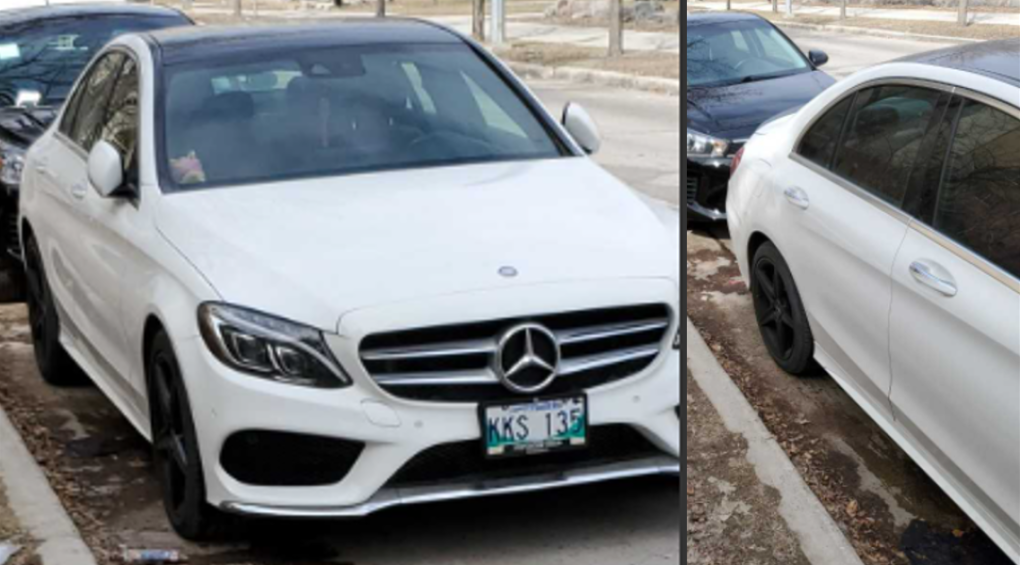 Winnipeg police are searching for a 2017 white Mercedes C300 4Matic after a reported carjacking on Monday. May 3, 2022. (Source: Winnipeg Police Service)

Winnipeg police have arrested and charged a 34-year-old man in connection with a carjacking on Monday.

On Tuesday, police had put a call out to the public to look out for a white Mercedes that police said was stolen outside of a convenience store in the 700 block of Corydon Avenue.

Police had previously released that a man pulled a weapon on three people, demanded keys to the car and then assaulted one of the three people before driving off.

After putting out the information, police said an off-duty officer saw the car Tuesday afternoon in the Glenwood neighbourhood and called for backup.

Police were able to arrest the driver and determined it was the same man involved in the carjacking.

He has been charged with robbery and driving while disqualified under the Highway Traffic Act.

He was released from custody on an undertaking.

Canada’s deputy attorney general says the Department of Justice had ‘no involvement whatsoever’ in the department’s review and delivery of documents to ongoing independent public inquiry into the 2020 mass shooting in Nova Scotia.

B.C. man frustrated over wait after being approved for COVID-19 vaccine injury compensation

Canada's inflation rate slows to 7.6 per cent in July as gas prices fall

OPINION | Economists are forecasting a recession, how should you prepare?

Explosions and fires ripped through an ammunition depot in Russia-annexed Crimea on Tuesday in the second suspected Ukrainian attack on the peninsula in just over a week, forcing the evacuation of more than 3,000 people.

A mother from Florida shared an adorable video of her son's interaction with the family's dog.

A two-minute video posted to TikTok that shows a man berating two women for not speaking English at a Richmond, B.C., SkyTrain station is making the rounds on social media.