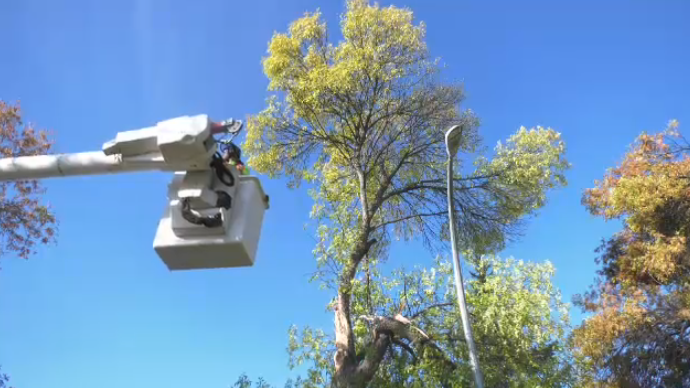 As crews in Winnipeg work to clear downed trees and branches caused by last week’s snowstorm, the city is getting a helping hand from some of its neighbours to the west.

As crews in Winnipeg work to clear downed trees and branches caused by last week’s snowstorm, the city is getting a helping hand from some of its neighbours to the west.

"We have partners from the City of Regina, (and the) City of Saskatoon,” said Martha Barwinsky, a city forester for Winnipeg. “We are expecting a City of Calgary arborist to be coming shortly as well."

Calgary dispatched 8 aerial truck operators to help with the cleanup. Another crew will follow behind them in a landscaper forestry truck to haul chipped wood to the landfill.

"They’re going to be looking after all the high risk hanging branches for the next two weeks," said Todd Reichardt, manager of Calgary Parks, north and west regions.

Barwinsky estimated about 30 thousand of the 300,000 trees in the city’s canopy have been impacted by storm damage.

She said the storm came at a bad time; a lot of trees had not yet shed their leaves. That weight, combined with the freezing rain, snow and winds, led to significant damage.

"This will take a long time to clean up,” said Barwinsky. “We estimate approximately one year to have this all cleaned up.”

It could also take up to five years to replant and restore the tree canopy, she said.

The city said failed trees on private property are the responsibility of the owner to clean up. That’s unless the tree is in contact with a power line, in which case, you’re advised to call 911 immediately. Residents are being asked to take tree limbs and branches to the Brady Yard Landfill, or to one of the city’s 4R Depots.

The city said it expects to be dealing with priority hazards for the next three weeks. The next phase will be removing debris from the boulevards.

Barwinsky says the City of Winnipeg is grateful for the help it is receiving from neighbouring cities, herself in particular.

"I want to thank our city partners. They've come from afar, they've driven long hours in their bucket trucks to come and help us, and we certainly do appreciate the help they're providing to us.”