WINNIPEG -- It’s not hard for Winnipeg Jets’ fan Roby Yeung to strap on his skates and hit the ice – all he has to do is walk out his backdoor.

Yeung has built a large, Jets themed skating rink in his backyard. He told CTV News he’s been a Jets fan since his family moved to Winnipeg from Hong Kong 31 years ago.

“When I was a little kid I always tried to convince my Dad to build me and my brother an ice rink in our backyard,” said Yeung. “When my wife and I moved into this house the first thing I noticed was the size of this yard and I was like ‘okay, I’m going to give it a try’.”

Yeung said this is the fifth year he’s built the backyard rink.

The first year he built it, it was only a tarp and snow banks, but it’s come a long way since then. The backyard rink now includes boards, lights, blue and red lines and a Jets logo at center ice.

“I wasn’t too sure how to do it, I was pretty nervous,” said Yeung about his first year building the rink. “Once I turned on the tap and the water started flowing, I was like this is the point of no return.”

Yeung said he uses red and blue construction paper for the lines and prints the logos off his computer. He used the original Jets logo on center ice as an homage to his favorite player, Teemu Selanne. 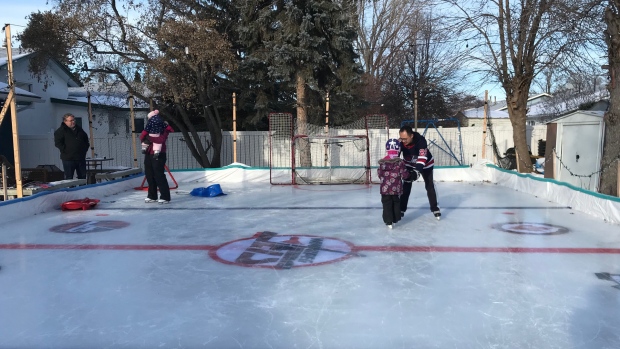 “I took the image off the internet, I made it a little bit bigger, and then I just printed it off in sections,” Ssid Yeung, referring to the logos.

Erica Yeung – Roby Yeung’s wife, said the Jets rink is a great way for their family and friends to enjoy the outdoors. She’s seen the rink evolve over the years.

“Each year it grew with the boards, and the lights, and the logos,” said Erica. “I’m not sure what next year will bring in.”

Yeung said he starts building the rink in late October or early November and it takes three days to finish.

He hopes the rink will make his daughters fall in love with hockey the way he did when he was kid.

Yeung said if his daughters do start to bringing friends over to go skating, there’s only one rule.

“No slap shots. I just don’t want anything to break.”