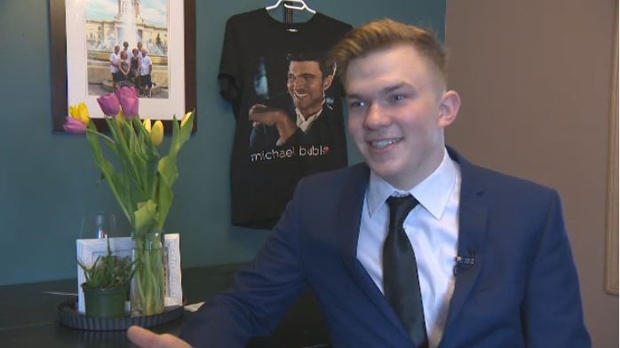 Twenty-year-old Justyn Skubovius was holding a sign in the crowd that read ‘I want to sing.’

He got the idea from some fans he met in the crowd.

“Before the concert I was talking to a few ladies I could tell were super fans,” said Skubovius. “They told me that they follow him to every concert. So I just asked them what do you think it would take to sing with Michael Bublé.”

He said the ladies jumped into action and helped him make the perfect sign.

“They told me at a certain moment, they’ll let me know to just hold it up and shout.”

To his surprise, the sign caught the attention of Bublé who, during the show, handed the microphone to the 20-year-old.

Skubovious belted out My Way by Frank Sinatra and had the whole crowd singing with him.

He says he’s a huge fan of Bublé’s and this was an opportunity of a lifetime.

“He turned around and saw me,” said Skubovious. “He walked towards me and asked if I could actually sing, I said I think so. Then he sat down on the side of the and we started singing, it still hasn’t really hit me that it happened yet.”

Skubovious says he still can’t believe that he sang in front of 15,000 people with his favorite artist.

“It sounded like the crowd was surprised, so I think I did an okay job.”