The spread of zebra mussels in Lake Winnipeg is prompting concerns about people coming to visit Grand Beach Provincial Park.

On Tuesday, large gobs of zebra mussels covered a rocky shoreline in Grand Marais, a short distance from Grand Beach.

"It's disappointing," said Scott Preston, who has been coming to visit the area for 25 years.

Preston said pretty soon children will have to wear shoes along the beach and in the water to protect their feet.

Cola Hasch works at Gray's Station, which sells food to beachgoers. She said it's the talk about zebra mussels at the beach that's been horrible, not the zebra mussels themselves.

Hasch said she plays with her 16-month-old son Archer on the beach and in the water all the time.

"We found a few between me and my baby but they were really soft and they broke up really easily, for me it's not a concern playing with him," said Hasch.

She's concerned people will stay away from Grand Beach because a large amount of zebra mussels have been found nearby.

Scott Higgins is a research scientist with the IISD Experimental Lakes Area, based in Winnipeg.

Higgins said there are beaches along the Great Lakes that have been covered with shells in the past, but it doesn't necessarily mean the health of the lake will be drastically harmed.

"There's been comments like that, Lake Winnipeg is dead, the zebra mussels are the last straw for Lake Winnipeg, but that’s simply not the case," he said.

"All of the Laurentian Great Lakes have zebra mussels in them, they’re not dead, they have fisheries in them, they have food webs, it just means there are going to be changes to the way Lake Winnipeg operates.

Higgins said zebra mussels have been confirmed in four bodies of water in Manitoba: Cedar Lake, Singush Lake in Duck Mountain Provincial Park, the Red River and Lake Winnipeg since 2013.

"They are doing incredibly well in the southern basin of Lake Winnipeg and they are starting to move into the northern basin," he said.

"There is some concern they are moving into other parts of the province, although those reports are not yet confirmed."

Higgins said in about the 700 or so lakes that have been invaded in North America, there are only two examples where they’ve been effectively eliminated. He said potash was added to small lakes.

"In a lake the size of Lake Winnipeg, there is no feasible eradication strategy," he said.

Higgins said while there is no way to slow down the invasion, the mussels don't necessarily mean all bad news.

"They can have an enormous filtration capacity on the lake, so think of them as a fairly large bio filter around the lake edges, and so they are removing plankton from the lake," he said.

Higgins said scientists are still trying to understand what the impact on the food web will be.

The province says Grand Beach is monitored daily and cleaned as required. 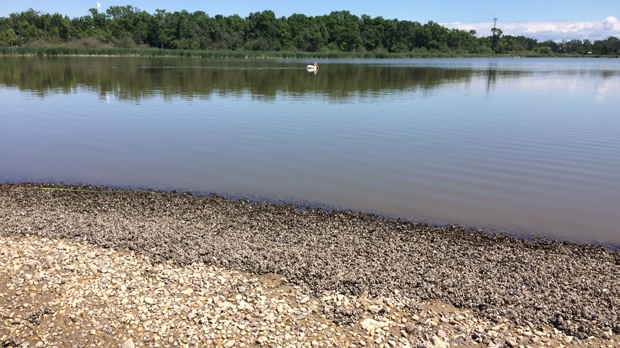