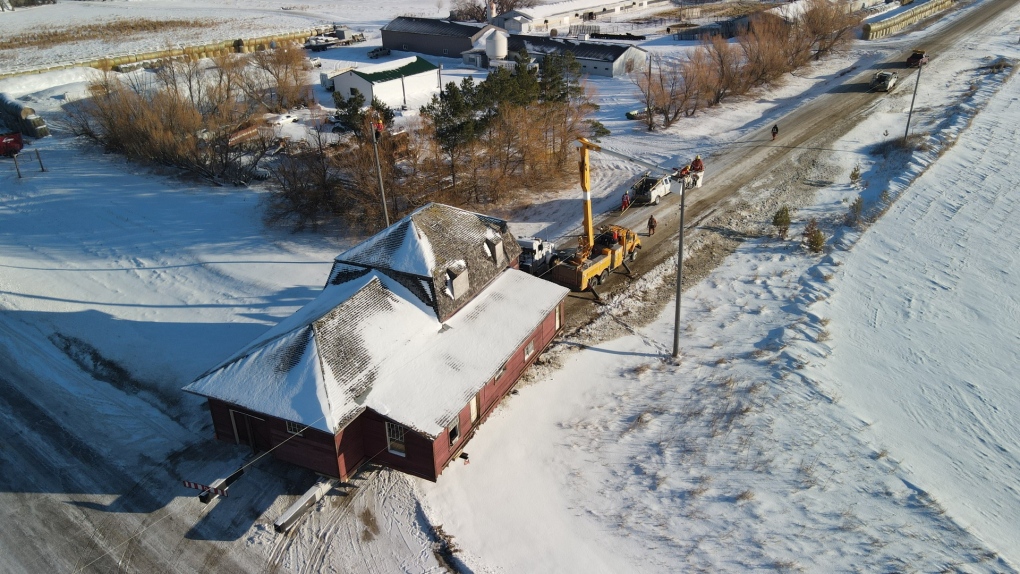 From playing in the building as a kid to documenting its move to Manitou, Man., Greg Currie has a unique connection to the La Riviere station house, which was built back in 1898.

The station house was one of the stops for the Canadian Pacific Railway (CPR) once the rail line was completed through Manitoba.

When CPR left the area, the Archibald Museum and the Wallcraft family snapped up the building in the 1980s and turned into a historical site.

The museum closed down in 2014 and the future of the station house was up in the air. That was until the Station on Main Committee was able to start the relocation process to have the building moved to Manitou to be next to an active locally owned rail line on Main Street.

For Currie, this was the perfect location for the building he knew well as a kid.

"In the 60s, the station master, Jack Tessier, had young children the same age as me. So I got to play in that station house, got to help out with some of the engines when they came and stuff. So a lot of fond memories of that station house," said Currie.

Fast forward to present day, Currie has been documenting the move to Manitou online as part of his Currie Country Living social media page, with the house arriving to its destination on Tuesday. 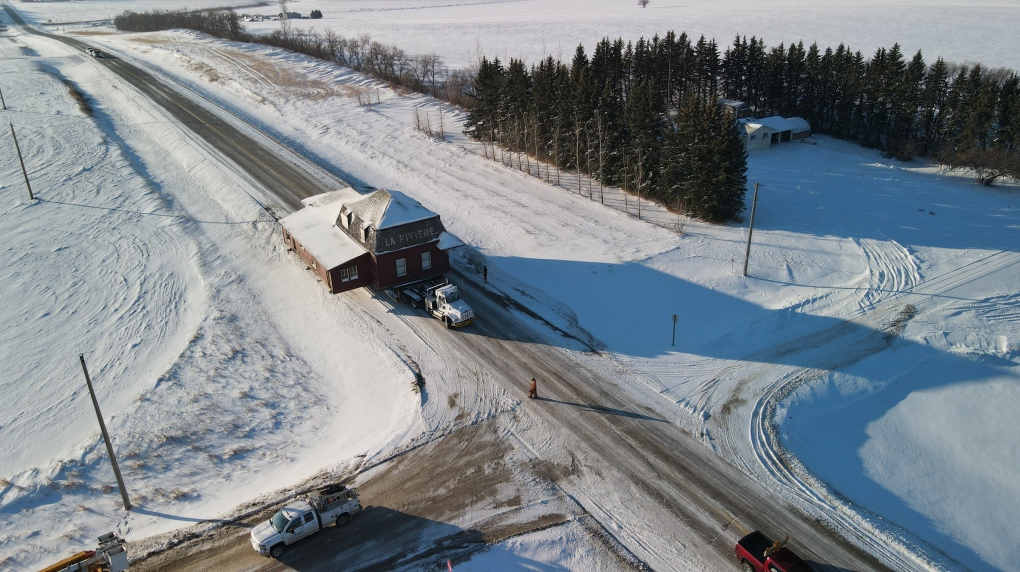 The La Riviere station house being moved down the road on its way to Manitou, Man. Nov. 22, 2022. (Source: Currie Country Living)

Travis Long is the chair of the Station on Main Committee, which is a subcommittee of the Pembina Manitou Heritage Association.

He said the moving process has been very smooth and it was exciting to bring the building into town.

"It's very, very gratifying to see. The effort of a lot of different volunteers in the community to kind of see their goal realized here with the building ending up at a prominent location," said Long.

Long is calling this situation "unique" saying getting an old station house next to an active railway is something that doesn't happen in this day and age. 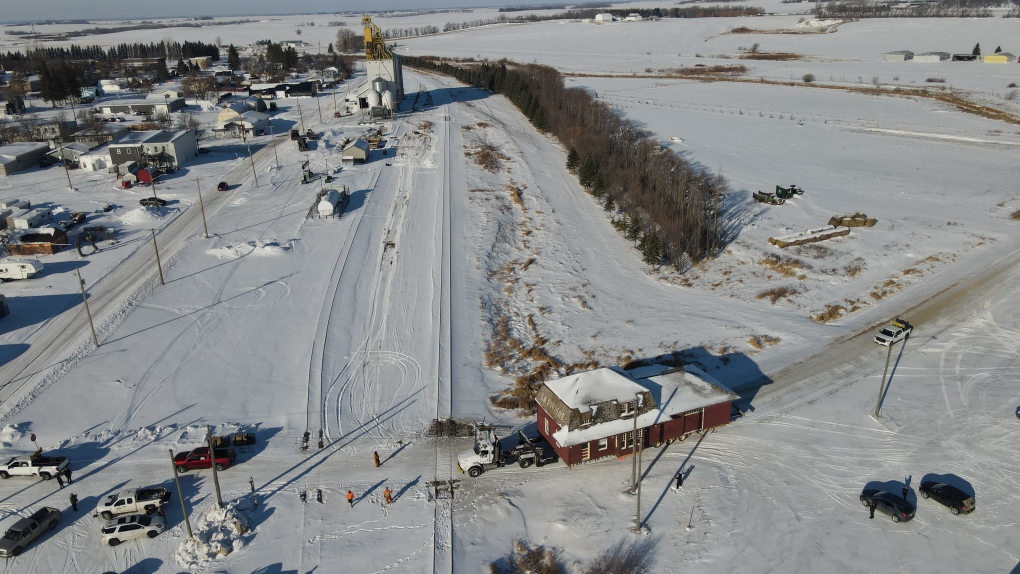 "You would not have this opportunity with most rail lines in Canada that are owned by CP and CN. It's just not something that they would allow anymore," he said. "We think that's going to be great for the future use of the site, and doing some unique programming at the facility as well that should hopefully increase traffic through the building over time."

When asked what the long-term plans for the building are, Long said the committee is still working to iron out the details on what could happen at the house.

"At minimum, we'd like to see it used as a seasonal facility. So open in the summer times for the community to tour. We're hoping that we can have some permanent displays inside the facility that will share information on the important role that railways played in populating this area of the province."

Long noted they plan on honouring the history of the building and La Riviere in all their future plans. 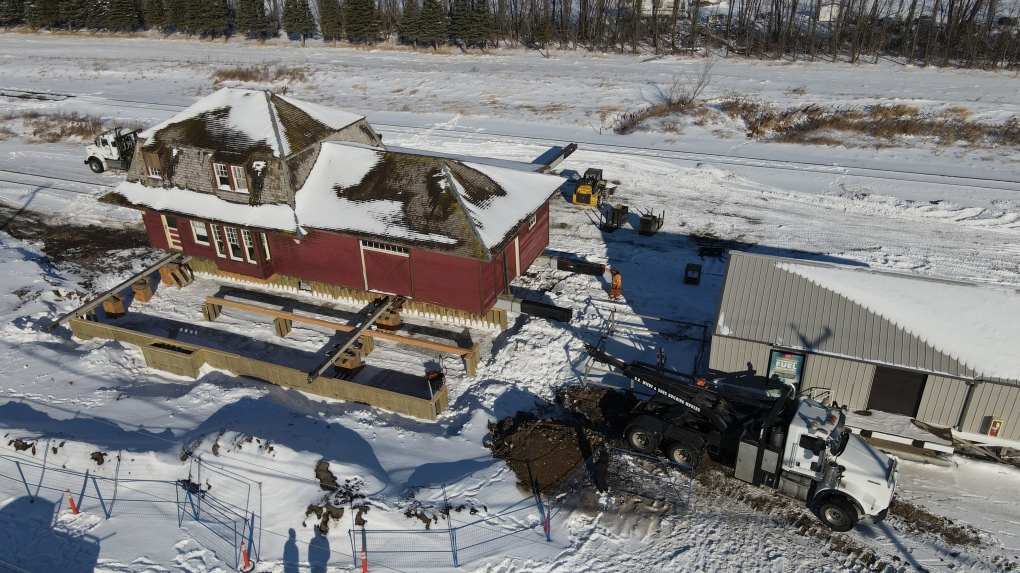 The La Riviere station house at it's new location in Manitou, Man. on Main Street next to an active railway. Nov. 22, 2022. (Source: Currie Country Living)

'LIVE WITH THEIR HERITAGE'

The station house is 124 years old. The main reason for the committee to move the building was to ensure its history and significance to Manitoba and the area were properly recognized.

Al Thorleifson, archivist and a fundraiser the Station on Main Committee, said Canada as a country has to continue to work to maintain historic architecture.

"We're a pretty young country in terms of Canada, and we don't have an awful lot of heritage architecture. You go to Europe and you see 1,000-year-old buildings. Well, if you've got 150-year-old building, it's pretty unusual," said Thorleifson.

He pointed out the Nellie McClung houses have been moved to the south end of Main Street in Manitou, the Manitou Opera House has been maintained and now the station house is being added.

"We're really proud of the historical architecture with our community." 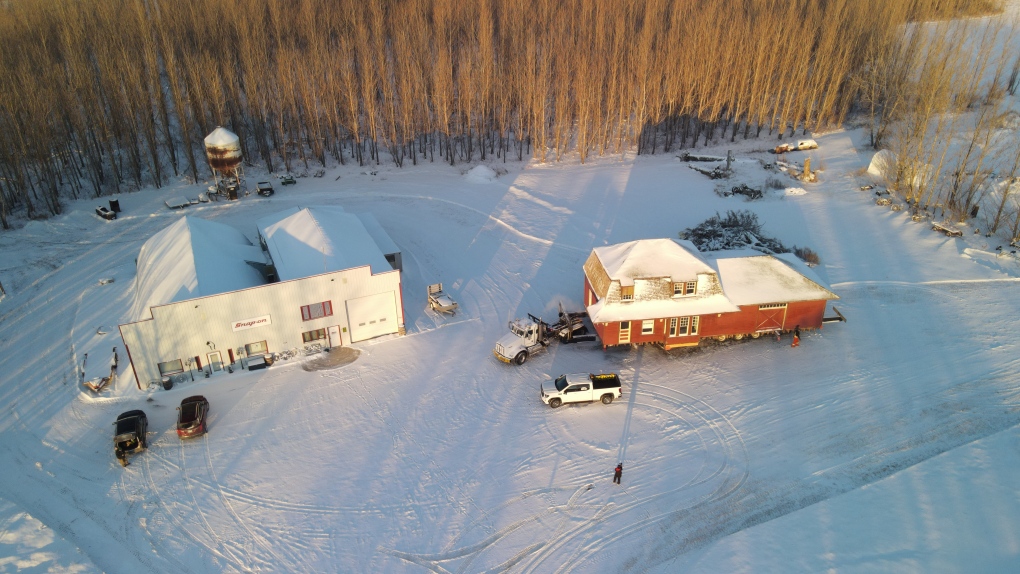 Keeping the connection to the past is something both Currie and Long agree is important for the area.

"(It's) almost like a time machine," said Currie. "Just touring through some of these buildings from the late 1800s, early 1900s, and seeing how things were done with all the technology we have now, we forget just what had to be done and how hard it was or how ingenious they were."

Long feels this will help the younger generations to understand how the area was able to grow and prosper.

"We think that this is really going to be an important physical way of allowing kids to touch and feel an important part of history for the area. So it's a lot more educational and a lot more interesting to kids," said Long.

In an exclusive interview with CTV’s Power Play, Polish Prime Minister Mateusz Morawiecki is praising the moves from Western countries to send tanks to Ukraine.

One of the planet’s most unique wildcats has been detected for the first time on the tallest mountain on Earth — Mount Everest.