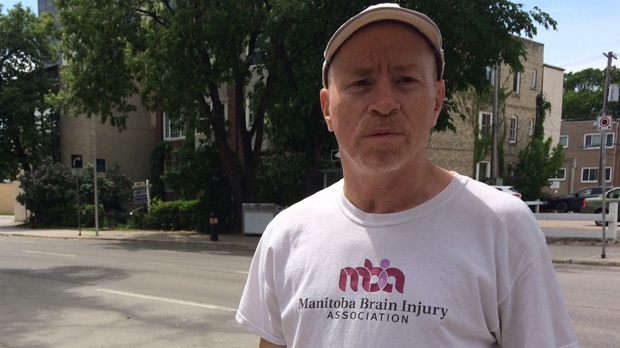 Blanchette suffered serious injuries in an assault, and is suing the Manitoba Public Guardian and Trustee after waking up from a coma to find everything he owned, gone.

A Winnipeg man who suffered serious injuries in an assault is suing the Manitoba Public Guardian and Trustee after waking up from a coma to find everything he owned was gone.

Marcel Blanchette, 52, has filed a statement of claim against the government agency for $93,778, alleging it gave control and ownership of his personal possessions to his landlord, which Blanchette claims were then given to a charity and then sold.

The case is now before the courts, but in statement of defence the Public Guardian and Trustee said it didn’t do anything wrong.

In December 2014, an unprovoked assault in a downtown apartment left Blanchette with a fractured skull, a broken nose, orbital fractures, and bleeding in the brain.

His attacker, Sherman Kang, pleaded guilty to aggravated assault and is serving a five-year prison sentence.

After the assault, Blanchette was put into an induced coma for one month at Health Sciences Centre, and spent three months in intensive care.

While he was in hospital, control of Blanchette’s affairs were transferred to the Manitoba Public Guardian and Trustee between January 12, 2015 until February 8, 2016.

On its website, the agency said it “manages and protects the affairs of Manitobans who are unable to do so themselves and have no one else willing or able to act.”

Blanchette, who worked as a computer programmer, doesn’t remember the attack but recalls waking up in Health Sciences Centre and getting the news about his belongings.

“Everything that I had in life was gone,” said Blanchette. “My step-family had come in from Saskatchewan and they helped with getting an email address and explained to me what had occurred.”

“I felt destroyed. It’s emotional, it’s difficult to think about what occurred.”

Blanchette said furniture, artwork, even his birth certificate, bank cards and credit cards were missing when he was discharged from hospital.

“Everything was wiped out,” said Blanchette. “I’m just not willing to sign off on what they did.”

In a statement of defence, the Public Guardian and Trustee of Manitoba said it exercised care, skill and prudence in making the decision which was reasonable under the circumstances.

The statement of defence said the agency “considered the costs to vacate Mr. Blanchette’s apartment, the cost of monthly storage charges and the concern that the sale proceeds of used furniture and other items are usually modest.”

“As it was not clear what Mr. Blanchette’s expense and other financial needs would be in the foreseeable future nor was it known when, if or under what conditions he would return to the community, the Public Guardian and Trustee of Manitoba made the decision to leave Marcel Blanchette’s property in his suite to be deal with by his former landlord.”

Blanchette said he didn’t have a Power of Attorney, a legal document which gives another person authorization to handle one’s affairs. But after what he’s been through, he wishes he would have had that in place prior to the attack.

“Hindsight…absolutely, absolutely,” said Blanchette. “I do have that in place now that if something happens to me, my step-family will have Power of Attorney and health care directive.”

“I feel like I’m being punished for not having that in place.”

He spends two hours each day working out and is taking courses at Red River College in hopes of going back to work as a computer programmer.

None of the allegations have been proven in court.

Blanchette said the case will be back in court later this month.