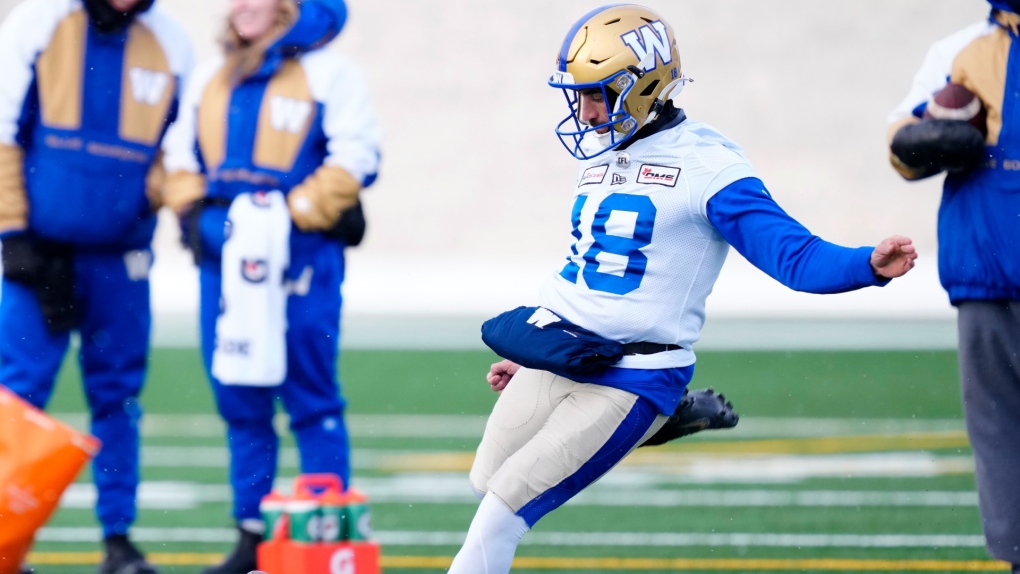 The Australian-born punter will complete his first CFL season trying to help Toronto defeat Winnipeg in the Grey Cup at Mosaic Stadium. The Argos have won in their last six trips to the CFL final while the Bombers, who posted a league-best 15-3 record, are looking for a third consecutive championship.

Haggerty will certainly be a double threat for Toronto.

The six-foot-five, 225-pound Haggerty has the ability to drive a football through the wind with a traditional spiral kick. But the 27-year-old Sydney native can also deliver an end-over-end, Aussie-style punt that can be more difficult to field and handle.

Sunday's forecast calls for a daytime temperature of -1 C that's expected to drop to -9 C by evening. But wind, projected at between 29 and 38 kilometres an hour, could dramatically impact all facets of the game.

"If we get the wind to our back, I think the rugby kick is pretty dangerous because John can hit a 60-yarder," said Toronto head coach Ryan Dinwiddie. "He has done a nice job for us all year."

Winnipeg has one of the league's top special-team performers in Janarion Grant. He returned 63 punts for 817 yards (13-yard average) with two TDs this season.

"The wind here is tough and it's not even because of what I do," Haggerty said. "As soon as I put the ball up in the air that (wind) starts swirling so it's going to be hard anyway for them to catch the ball."

A fact not lost upon the speedy Grant.

"It's something we have to be prepared for," he said of Haggerty's Aussie kicks.

Haggerty was recruited to play football at Western Kentucky (2019-21) before being selected in the first round, fourth overall, in the 2022 CFL global draft by Toronto.

Haggerty finished second in CFL punting with a 48.178-yard average, just behind compatriot Cody Grace of the Calgary Stampeders (48.183-yard average). But Haggerty registered a league-high 12 punts inside an opponent's 10-yard line.

Haggerty, an East Division all-star this season, expects to use spiral punts when booting into the wind and leave the Aussie kicks for when he's kicking with the wind.

"It's hard to kick the Aussie ball into the wind because it ends up holding up and doesn't go as far," Haggerty said. "But if you hit a spiral in these conditions, the ball flies.

"You just have to hold on to the ball as long as you can when you're kicking into the wind. With it, you just let it fly so you don't have to worry about it much."

However, should an Aussie kick hang up in the air and fall short, it would give Haggerty an opportunity to run downfield and recover the football for the Argos.

"I've chased down a couple but I haven't got close yet," Haggerty said. "We'll see what happens but if it's windy, I will be chasing everything."

Keeping warm will present a challenge for Haggerty on Sunday, especially his hands given he needs to field snaps cleanly before punting the football.

"My hands won't be leaving here (hand pouch around his waist)," he said. "The ball flies pretty well here but it's windy out there and it's cold so you have to worry about your hands staying warm and that sort of stuff."

Dealing with windy conditions isn't anything new for Haggerty. With BMO Field being located on the shores of Lake Ontario, the wind often blows and swirls there.

And three times this season, the Argos played at Tim Hortons Field in Hamilton, which many kickers and punters feel presents the most difficult conditions in the CFL for them to do their jobs effectively.

Toronto is looking to secure its first Grey Cup since 2017, but Haggerty doesn't allow himself the luxury of thinking about holding the championship trophy.

"I only think about the process and the outcome will take care of itself," he said. "But this (week) has been a lot of fun.

"It's been busy, we've been non-stop every day. It's going to be nice these next couple of days to wind down, relax and focus on the game."

This marks Haggerty's first season in professional football and he couldn't be happier about his experience in Canada.

"I feel like I've grown as a player here," he said. "You have to treat it more seriously and as a job but you have more time to work on your craft so I feel that's helped me become a better punter.

"It's been a heck of a ride. I've enjoyed every game, every practice. We have a great team here, it's just been a lot of fun."

This report by The Canadian Press was first published Nov. 19, 2022.