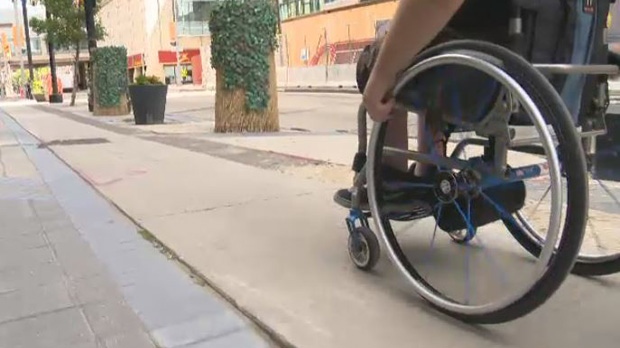 The Accessibility for Manitobans Act became law in 2013 with the aim to identify, prevent and remove barriers that people with disabilities face. (File image.)

An independent review of the Accessibility for Manitobans Act is recommending that small organizations be exempt from documenting their accessibility measures, policies and practices - which one non-profit says will exempt 95 per cent of businesses from implementing the act in a meaningful way.

According to a provincial news release from February, the review was carried out by Theresa Harvey Pruden and focused on the work that’s been done since the legislation was put in place and the structures that support its implementation.

Harvey Pruden held consultations with service providers, Manitobans with disabilities, organizations impacted by the laws, as well as members of the accessibility advisory council.

“There is evidence that stakeholders, government, businesses, municipalities, public-sector organizations, non-profits and citizens have embraced the concept of maximizing accessibility for all Manitobans and have embarked on the journey to full implementation of the AMA,” said Harvey Pruden in the release.

On April 23, Barrier Free Manitoba said in a news release that it appreciates the review, but still had several concerns.

The non-profit said it was worried by a lack of consultation with people facing accessibility barriers; a lack of willingness to address concerns over the Built Environment Standard; the idea that implementing the act should be cost neutral and that the legislation is an aspiration; the lack of recommendations for a compliance framework; and a reliance on Ontario’s experience with similar recommendations.

The Accessibility for Manitobans Act became law in 2013 with the aim to identify, prevent and remove barriers that people with disabilities face.

Families Minister Heather Stefanson said in February the province is committed to moving ahead with many of Harvey Pruden’s recommendations.