When there’s something strange crawling in your house, who are you going to call? Bug Dusters!

In Winnipeg that happens to be a team of teenagers.

The group of 10 have invented a bedbug and cockroach exterminating hovercraft.

They hope it blows away the competition at the upcoming Dare to Discover Program put on each year by Canadian Manufacturers & Exporters.

The hovercraft was designed and manufactured at Windsor Park Collegiate, and it was created in the likeness of the iconic Ghostbusters wagon.

The team has even has matching Bug Duster uniforms and a theme song.

When the project started, the challenge was to create something that could actually be used in Winnipeg.

One of the students shared a story about a family member who had multiple bedbug infestations, and the team ran away with the idea.

Students on the team believe the hovercraft is perfect for the pest control industry, because it can enter homes and spread chemicals without humans having to go inside. 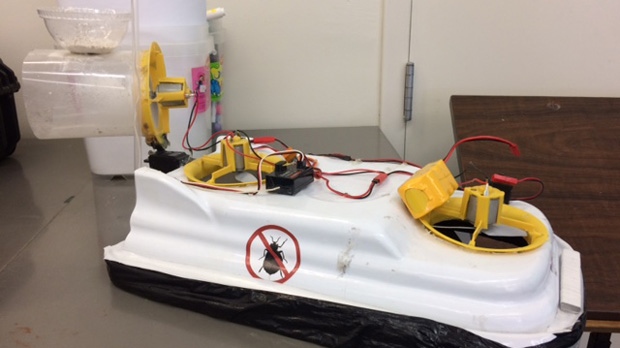 The prototype hovercraft has a fan mounted on the back, which uses simple laws of physics to spray insecticide dust out the back.

Taz Stuart from Poulin’s Pest Control consulted on the project.

On Thursday, he came to the school to see how the hovercraft was working and if it was fanning out the powder at the correct rate.

Stuart said he is optimistic something like this could be used on the job.

After the competition is over, Stuart hopes to bring the hovercraft into a home to see how it moves.

The semi-finals are in Janurary 2017. If the team does well they will compete in March against other Manitoba schools.