WINNIPEG -- WINNIPEG -- Grey Cup pride is unwavering in Winnipeg – Blue Bombers linebacker Adam Bighill gave Winnipeggers another chance to get up close to the prized trophy on Friday.

Around noon, Bighill brought the Grey Cup to the concourse at 201 Portage Avenue, giving fans a chance to take a photo with the Bombers’ linebacker and the trophy.

“To be able to share it with them, I mean we do this for them, we wouldn’t be able to do what we do and this is the best part of it.”

Over a hundred fans lined up to take pictures, hold the cup, and get their Bombers gear signed.

“I’m here to celebrate the Grey Cup,” said Richard Underwood, who waited in line for over half an hour and got his jersey signed after meeting Bighill for the first time.

“I went to the parade, I went to the social. It’s amazing for the city just how happy everyone is, and it just brings everyone together.

Courtney Schan has been to every Grey Cup celebration in the city so far and was excited to get a chance to hoist the trophy.

“I’ve been waiting my whole life for this,” she said. “It was an honour to meet him and I thanked him for making my dreams come true.

Bighill spent nearly two hours posing with fans, signing autographs, and giving Winnipeggers a chance to get close to the Grey Cup.

“This is fun,” he said. “I mean, being able to take pictures and autographs and celebrate with the cup, I mean this is what people want.

“We want to win championships, and at the end of the day to be able to share that with them and show them what we’ve worked so hard for and they’re a big part of it, that’s why we do what we do.”

The photo-op comes after nearly two weeks of celebrations in Winnipeg, including a parade down Portage Avenue and multiple parties with the Grey Cup. 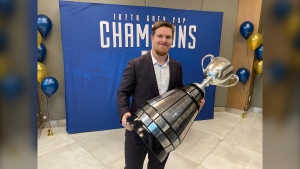