Brandon woman turns streets into a memorial for 215 lost children 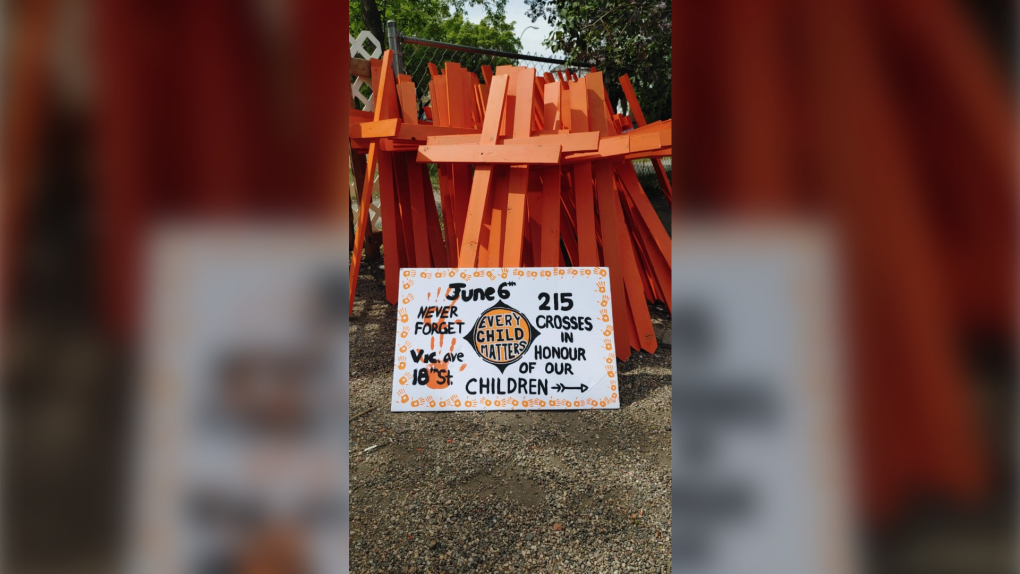 A Brandon woman has turned some city streets into a memorial for the 215 children whose remains were found at the site of a former residential school in Kamloops, B.C.

Jordan Wilson, who is the granddaughter of a residential school survivor, said when she learned of the news of the unmarked graves, she knew she had to do something.

“I wanted to take an opportunity to voice for them and voice for those who don’t have a voice anymore,” she said.

Wilson said she builds for a living, so she felt that building 215 crosses was the best way she could commemorate the children.

In the end, with the help of dozens of other people, she set up the crosses at Victoria Avenue and 18th Street in Brandon.

“Two hundred and fifteen written down may seem like a small number when it’s written down with so many others, but when you put it in perspective, it’s completely astonishing,” she said.

“It took over all of Victoria Avenue in Brandon, a huge portion of 18th Street.”

Wilson noted that she was blown away by the number of people who helped with the memorial.

“I figured there would be a few people and a few would set them in place, but today it turned out to be a life-changing moment to walk with others and share that experience and honour those we lost, those we cherish, and those that survived,” she said.

Wilson said she believes other residential school sites need to be searched as well.

“We need to bring our children home,” she said.

Wilson added that it is sad to think how many graves will be found as more sites are searched.

“It’s so sad. I know the numbers are going to rise if they start searching other residential schools and they find more,” she said. “There could be tens of thousands of children being found.”

She said that once these searches begin, she will be taking on another project to honour the children.

“I want something set in stone, preferably concrete, but that’s still a work in progress,” she said.

Wilson said her grandmother attended the residential school in Brandon.

“She went through some hardships,” she said, noting that her grandmother always said there were others who had it worse.

Wilson said both of her parents attended day school and said the same thing.

“They always made sure there was always a positive outlook for me and my sisters to look back on,” she said.

“But now that I’m starting to look back and hear more stories and hearing other things, it’s hard to see a positive side.”

Canadians heading to the polls to choose next federal government

Canada's first-ever pandemic election culminates today as Canadians from coast-to-coast go to the polls to choose the 338 members of Parliament to sit in the House of Commons.

Canada has now fully vaccinated 78.77 per cent of the country's eligible population.