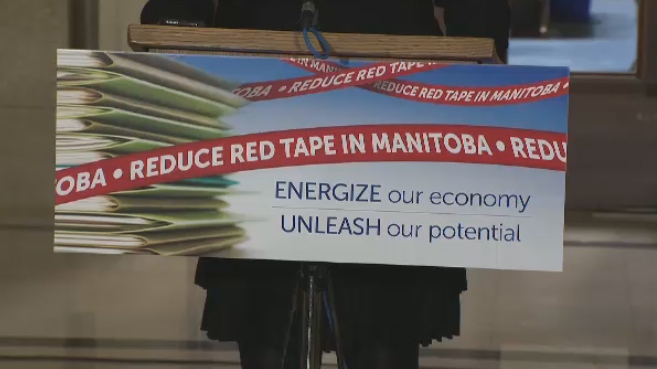 The Canadian Federation of Independent Business says the province is one of three in Canada to score an A in its 2018 Red Tape Report Card.

The Canadian Federation of Independent Business says the province is one of three in Canada to score an A in its 2018 Red Tape Report Card.

The province is also being praised for making the greatest improvement in Canada. In the previous report, Manitoba scored a D+.

The CFIB attributes the improvement to measures that include the creation of a new law that will lead to the elimination of two requirements for every new rule created and a task force focused on reducing red tape.

“I think you may be the most improved ever on CFIB’s report card,” said Laura Jones, executive vice-president, CFIB, at a news conference held by the province Tuesday. “I don’t think we’ve ever seen a jurisdiction go from worst to first, as quickly as you have.”

Jones went on to say that governments need to be accountable when it comes to regulation, because of the degree of power governments have.

She also said the province of Manitoba has been ambitious in setting red tape reduction goals and that it could look to BC, which has received an A grade for six years in a row, as an example.

“It’s really about simplifying things, and getting rid of the difficult language, the duplicative requirements, the rules that aren’t really delivering health and safety benefits, but are very costly,” said Jones, adding that the goal is not to cut necessary rules.

As part of its red tape reduction strategy, on Tuesday the province announced it would be updating regulations for manufactured homes and RVs and intends to do away with permit and inspection requirements for selling used mobile homes.