Can Manitoba’s wet weather increase the risk of spring flooding?

Can Manitoba’s wet weather increase the risk of spring flooding? 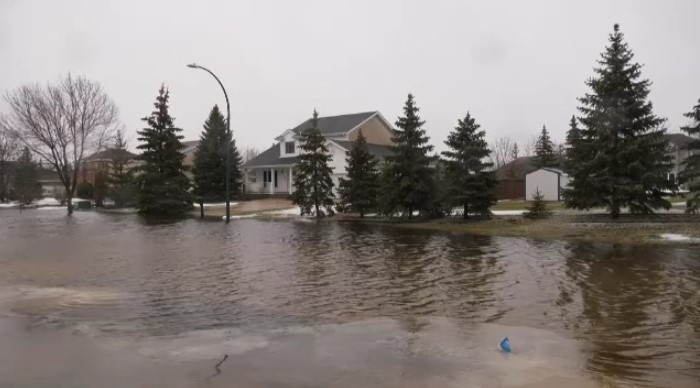 File image of the rainfall in Manitoba in April 2022.

Between the heavy snow and record-breaking rain, Manitoba saw one of the wettest years on record in 2022, and though it may seem far away now, it could have an effect on next year’s spring flooding.

According to Alex Koiter, associate professor at Brandon University in the department of geography and environment, this year’s snowy and rainy weather could have an impact when it comes to flooding in 2023 because soil moisture is a key parameter in flood forecasting.

“Going into the fall and the winter with reasonably wet soil, typically increases our risk of spring flooding,” he said in an interview on Wednesday.

Koiter added that whether the wet weather will contribute to flooding will largely have to do with this coming winter’s snow accumulation.

He explained that if this year’s winter brings heavy snow, it means there will be lots of water available for the spring melt and an increased chance of flooding.

“If we have lots of snow, the risk of flooding starts to go up,” he said.

Another factor to consider when it comes to flooding is how the spring shapes up. This includes whether the temperature warms up quickly or if Manitoba goes through a number of thaw and refreeze periods.

Koiter said these factors impact how the water moves across the landscape and whether it moves into the soil or runs off.

Another key characteristic when it comes to spring flooding is whether Manitoba has a “rain on snow event” this spring, according to Koiter.

“So typically with those types of events the runoff can be quite significant because you have the precipitation, but that precipitation is also melting a significant amount of snow,” he said.

“Typically when we have frozen soil, the rate of infiltration - the rate of water moving into the soil- tends to be a bit lower, which means we can have a little bit higher amounts of runoff."

Koiter said that one interesting thing about Manitoba’s wet weather this past year was that different parts of the province got quite different amounts of precipitation.

“There is a lot of regional variability in terms of the precipitation we’re seeing,” he said, noting that there was a notable difference between Winnipeg’s and Brandon’s cumulative precipitation.

This means that the risk of spring flooding can change depending on where you are in the province due to the amount of excess moisture.

“I know even during the summer when we had some of those thunderstorms, they often were very localized in terms of the precipitation amounts,” Koiter said.

Despite bringing a risk of spring flooding, Koiter said the wet weather was helpful to the environment as it helped to replenish the store of soil water following a dry year in 2021.