Coalition calls on city to increase funds to save tree canopy

WINNIPEG – A group of concerned Winnipeg residents are calling on the city to put aside more money for Winnipeg’s urban forestry branch in next year’s budget, after a year of extreme weather conditions and insect infestations that it said has “devastated” the city’s tree canopy.

“We ‘re concerned about the reduction of funding to take care of the city’s forest,” said Lisa Forbes, a member of the Glenelm Neighbourhood Association’s Tree Project Committee. “We had two major things happen due to weather changes that we can attribute to climate change. So we had an incredible drought this summer, we had this incredible snow storm at the end of the summer, and throughout it – unprecedented devastation by three separate insect infestations. 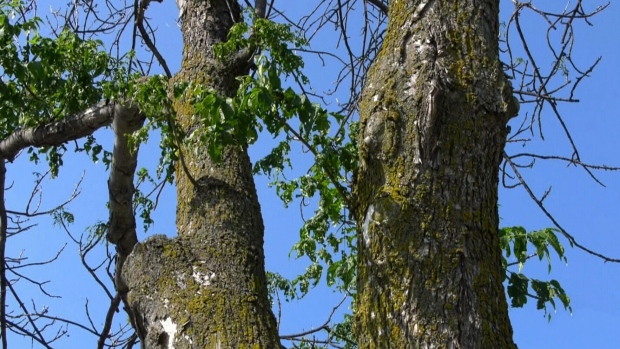 Two pests pose a threat to ash trees: the emerald ash borer, which attacks both varieties of trees, and the cottony ash psyllid, more commonly known as jumping tree lice, which can damage black ashes but will stay away from the green. (File image).

"All of these combined together make it an emergency for our trees,” said Forbes.

The city said about 10 per cent of city-owned trees in Winnipeg were damaged by an October snow storm.

The group is calling for the city to increase funding to the urban forestry branch by a minimum of $7.6 million, for a total budget of $11.6 million per year. The city is in the process of creating a multi-year budget that will last from 2020 to 2023, and a spokesperson said to CTV News in an email that Winnipeg’s urban forest is a valuable asset and it’s health and wellbeing is important.

The urban forestry branch is scheduled to present an updated budget to the city on Nov. 16, with delegations invited to present on Nov. 27. Forbes encouraged Winnipeggers to write letters to their city councillors to request an increased budget before the presentation.

A city spokesperson also said the city is developing a plan to put a program in place to encourage Winnipeggers to plant one million trees before the city’s population reaches one million.

They said currently, homeowners who want to plant trees on a public right-of-way can do so at their own cost, provided they use a pre-qualified contractor to complete the work.

-With files from CTV's Jon Hendricks and CTV's Simon Stones