Coping with the cold: Why some Winnipeggers choose outdoor encampments over shelters

WINNIPEG -- Despite an extreme cold warning with temperatures dropping to below -40C, Warren is out shoveling the snow on a small path to his home – a three-person tent covered in tarps on the corner of Martha Street in Winnipeg.

He's been living in the tent since May, with a small propane heater and a campfire keeping him warm during the bitterly cold winter nights.

But, as of Thursday morning, that may all change when the city comes to tear down the homeless encampment over safety concerns.

"Here, it just feels like more of a home," said Warren, who goes by 'Towers' because of his height. "I can eat when I want to eat and I can go out and have a cigarette."

The city said Wednesday it has made the decision to permanently tear down the encampments on Martha Street and Henry Avenue, after a fire destroyed a teepee shelter set up in the area. 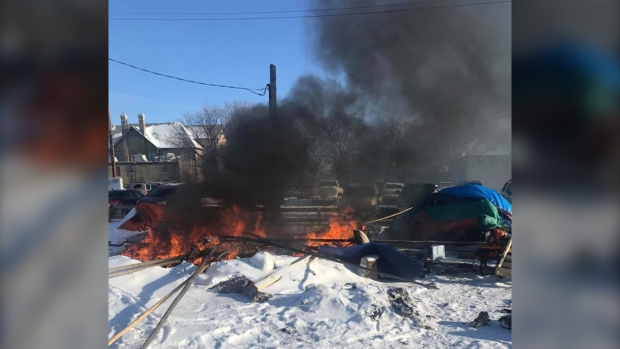 A teepee that had been set up as a homeless shelter was destroyed by fire on Tuesday, Jan. 14, 2020 (Source: Facebook/Grant Fleury Sr)

"Winnipeg Fire Paramedic Service (WFPS) has responded to a number of incidents which could have had dire consequences for the individuals in the area," the city said in a written statement. "While only one person was reported injured to-date, inspectors and responders identified numerous fire and life safety hazards at the temporary encampments."

The city said it would heading to the sites Thursday morning to clean up any materials left behind.

As of Wednesday evening, Towers said he hadn't heard anything from the city.

"It would be pretty surprising if they did come by," Towers said. "We keep this site relatively clean."

As for some in the community, the city's decision to remove the encampments has left them frustrated.

"I think the city hasn't really done anything at all to help these people," said Owan, a friend of Towers who use to live in the tent encampment, but has since moved into a house in the North End. "All they do is they come in here and they tell us what we can't do, what we can't have. We can't have fire inside the tent, but how are we supposed to stay warm?"

Owan said others in the community drop by to bring blankets, food, propane and materials for the encampments.

"Leave these guys alone. Give them what they need, help them out as best they can, and quit giving them a hard time."

HOMELESS SHELTERS NOT AN OPTION FOR SOME

The city said it will be working with Main Street Project and other social outreach providers to make sure those displaced by the camp’s removal can find an alternate shelter, but Towers and Owan said shelters are not always an option for some people.

"They feel more independent out here, they feel like they are able to do what they have to do to survive," said Owan. "It sometimes isn't fun to go to a shelter – to be told what you have to do, to be told you have to be in at a certain time."

Towers said he's stayed in some shelters, but says it's cramped with sometimes over 50 people. There is also the concern of theft, bed bugs and safety weighing on his mind, he said.

"I just like it out here. It's more mine," Towers said. "I can take off my shoes and relax here, cause it's pretty warm in my tent." 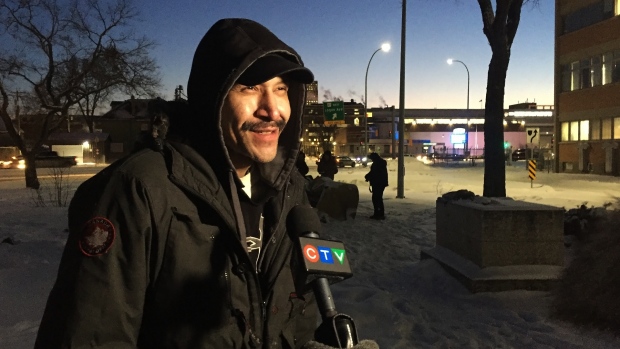 Rick Lees, executive director of Main Street Project, said lots of the people in these encampments do access services provided by the charitable organization, but still choose to live outside.

"There's space for everybody, and everybody will be looked after and accommodated, but there is a group of people that choose to not access those services, and for a very good reasons of dignity and respect," Lees said.

Lees said people living outside have a right to live in dignity and respect, and so there should be conversations about what they need.

As for Towers, he says he would like to stay in his tent until summer if possible - but if the city does move him out?

"I guess I'll go find another place, maybe across the street."

-with files from CTV’s Jon Hendricks