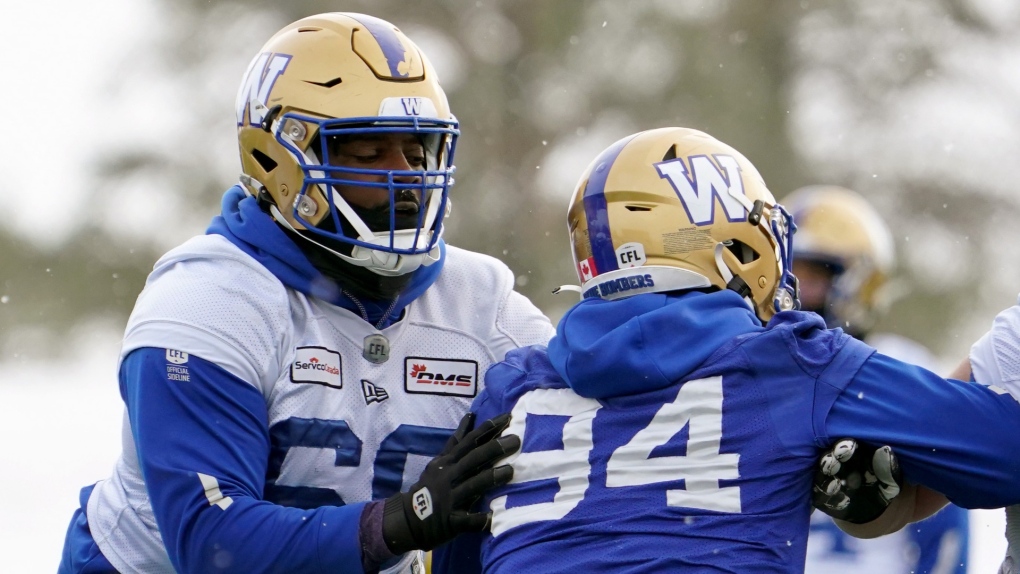 REGINA -- Before every game, Stanley Bryant awaits a text from his mother Bernita Hines asking him "are you ready for some football?"

His answer, in both word and on-field deeds, is a resounding "yes."

Winner of the CFL's most outstanding offensive lineman award for a record fourth season, Bryant will have a hand in protecting Blue Bombers quarterback Zach Collaros in Sunday's Grey Cup game against the Toronto Argonauts.

Since Collaros will play on a suspect right ankle, the more protection he gets, the better Winnipeg's chances of winning a third straight Grey Cup.

"We're going to block and do things like we've always done all season," Bryant said Saturday following Winnipeg's walkthrough for the championship game.

"We know that regardless of who is back there, quarterback or running back, we've just got to make it work. That's our mentality. Be the best, most physical group on the field."

"It's a blessing," Bryant said. "Just one of those things you have to sit back and reflect on once football is done.

"You just stay in the moment. It's always a group effort, anything we do. Offensive line, quarterback, running back, everybody plays a part. It's special, but it's time to move on and get ready for the Grey Cup."

An offensive lineman's contributions to a game are difficult to quantify in the absence of individual statistics.

Sacks allowed, quarterback passing yards and the yards and touchdowns the running backs and receivers rack up are all reflections of how well he and his linemates do their jobs.

"I take the most pride in the quarterback (staying) upright and keeping my name from being called out on national TV," Bryant said. "Every time you hear an o-linesman's name, it's a bad thing."

The Bombers (15-3) surrendered the second-fewest sacks this season (29).

The 36-year-old Bryant, from Goldsboro, N.C., is a future Hall of Fame linchpin in a line that fuels Winnipeg's offence in the air and on the ground.

"As an offensive lineman, you want to be known as being a consistent and physical player, I think those are two incredibly important traits and that's exactly what Stan is to a T."

Bryant spent his first five CFL seasons with the Calgary Stampeders. He won a Grey Cup with them in 2014. The East Carolina alum signed with Winnipeg the following year and earned two more championship rings in 2019 and 2021.

He's honed his craft over a dozen years in the league.

"Just getting older, seeing more defences, seeing more players and knowing exactly what they're going to do, there's not too many things I haven't seen at my age," Bryan explained.

"I think each and every year I just got better and better in trying to improve on small things. It could be mindset. It could be technical things. I think I've done well at both areas.

This report by The Canadian Press was first published Nov. 19, 2022.