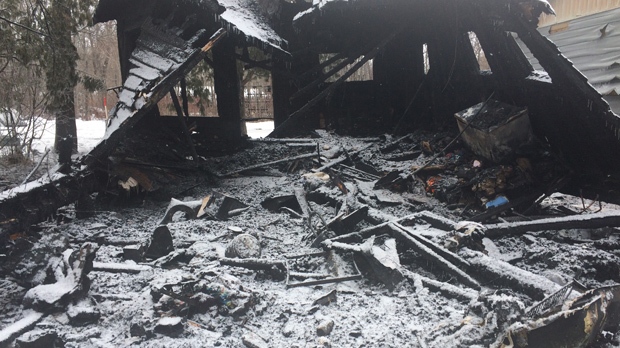 A fire destroyed a cottage and damaged two others Tuesday.

A cottage was gutted by fire Tuesday night in Grand Beach, Man. as three fire departments worked to prevent it from spreading.

Mark Sinclair, chief of East Beaches Fire and Rescue, which the service first to respond to the fire after being called at around 9:15 p.m., told CTV News, “The initial cottage, when we got to the scene, was basically fully engulfed.”

“We had large flames coming out of the roof, probably, we’re talking 20-foot flames,” he said, adding that the adjacent buildings on both sides were starting to melt and ignite, so reinforcements from Victoria Beach and East Selkirk fire departments were called in. He said cottage lots in the area are narrow and fire can easily spread between buildings.

While the neighbouring structures saw only exterior damage, the cottage where the fire started was left a collapsed, blackened shell.

In Pictures: Cottage destroyed by fire in Grand Beach

Sinclair said the fire was accidental in nature, and is believed to have originated from space heaters that were unintentionally left on after cottagers left.

No one was hurt, Sinclair said, adding fire crews were on scene until around 2 a.m. Wednesday.

RCMP, who also attended, confirmed the fire is not considered criminal and the investigation into it has been closed.