Flu season upon us: What to expect in Manitoba following early start to season in Australia

WINNIPEG -- Flu season is just around the corner, and the Province of Manitoba is reminding people to get their free flu shots in order to protect themselves and others at risk of more serious complications.

Health Minister Cameron Friesen said Manitoba typically looks to the Southern Hemisphere, specifically Australia, to get a gauge on what our flu season will be like.

“Theirs began a full two months earlier,” Friesen said Thursday. “It resulted in more deaths than usual, with moderate to high levels of hospitalization as a result.”

So far this fall, the province has seen very sporadic flu activity, which Dr. Brent Roussin, Manitoba’s chief provincial public health officer, said is typical for this time of year. He said the flu season hasn’t officially started yet.

Last year, 17 people died from the flu, while another 42 were admitted to intensive care units. The province said in total there were 228 hospitalizations due to influenza in the 2018-19 season. Manitoba saw 10-year highs the year prior, with 46 deaths, 35 ICU admissions, and 505 hospitalizations.

In early October the federal government said some provincial vaccine programs may face delays, due to a supply shortage.

Friesen said Thursday that at this time the province expects there to be more than enough vaccines for everyone who wants one. To date, approximately 240,000 doses have been sent to healthcare providers in Manitoba, which is about 84 per cent of the total supply. The rest is expected to arrive in the coming weeks, said the province.

A record number of people received the flu shot last winter, with 336,000 doses administered. That works out to approximately 23.6 per cent of Manitobans with health cards.

The province has also made a high-dose vaccine available for seniors in long-term care facilities, which may provide better protection for those at an increased risk of complications from the flu.

“The flu vaccine protects you and helps to protect those around you including infants, people with chronic illnesses such as diabetes or asthma, and those seeking treatment for cancer,” said Friesen. 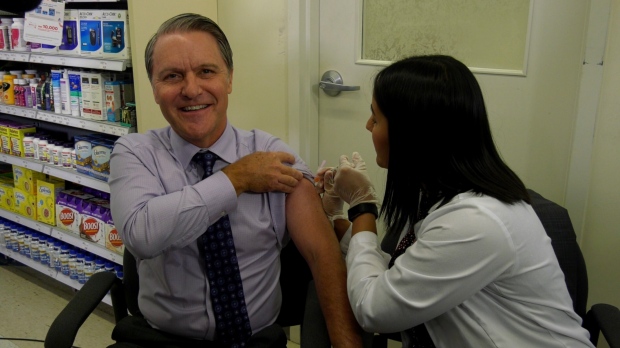 He also noted that immunization is a cost-effective way to reduce someone’s chance of getting the flu, and said people seeking medical help for flu symptoms leads to increased wait times and is costly to the healthcare system.

The province recommends people contact providers beforehand to ensure they have the flu vaccine available. The nasal spray option will not be available in Canada this year.

More information can be found on the province’s website.