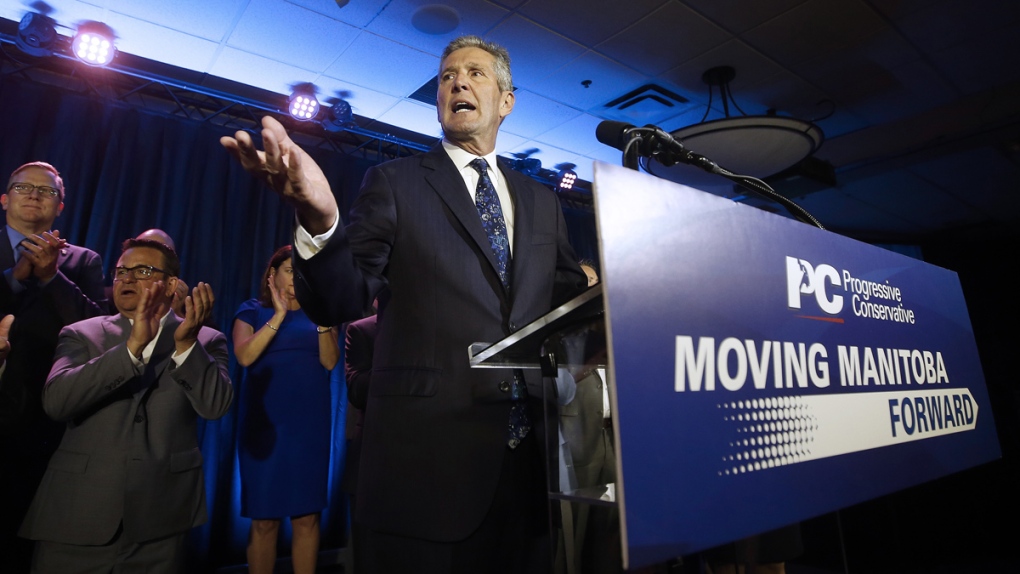 Pallister called an election more than a year before it was scheduled and the vote Tuesday ended with a second consecutive majority government for the Tories.

The party was projected to capture 30-plus seats in the 57-seat legislature with an agenda to continue cutting costs, streamlining health care and reducing taxes.

"Forward to balanced budgets. Forward to better care, and sooner. Forward to new schools for our children and grandchildren. Forward to a stronger economy for all of us. And forward to more affordability for families, with lower taxes," he said.

The Tories failed to match their 40-seat high in 2016, the biggest majority in a century in Manitoba, which ended 17 years of NDP government.

Pallister himself was declared the winner in his Winnipeg constituency of Fort Whyte.

The New Democrats were on track to add a handful of seats to the 14 won in 2016 and remain as the Official Opposition. They also improved their share of the vote. Leader Wab Kinew won his seat in Fort Rouge.

Kinew said the extra seats are a message of support and a shot across Pallister's bow.

"The seats that we took back made it very clear that Manitobans want us, the New Democrats, to not only be the conscience of Manitoba, not only to be the opposition of Manitoba, but to be the progressive voice for Manitoba," he said to applause.

Kinew ran on a promise of more money for health, education, infrastructure and social programs, and he accused the PCs of implementing health changes that made the system more chaotic.

Liberal Leader Dougald Lamont won in his Winnipeg constituency of St. Boniface but his party was struggling to retain the four seats it had at dissolution.

Four is the minimum number needed for official party status, which carries with it extra funding for caucus staff, committee spaces and time in question period.

Lamont, speaking to supporters, said he was proud of his team running a positive campaign that pushed critical issues to the forefront. But he said politics is ultimately an unforgiving "blood sport."

"You can put everything you have into something. You can deliver the best work of your life, and sometimes it's still not enough. And that's life. And that's politics," he said.

"We will continue to build."

Both Lamont and Kinew will face mandatory party leadership reviews.

The Green Party of Manitoba was shut out once again in its bid for its first seat. Party leader James Beddome ran and lost against Kinew in Fort Rouge -- his fifth attempt at a seat.

All but one of Pallister's cabinet ministers at dissolution were re-elected, including Finance Minister Scott Fielding, Health Minister Cameron Friesen and Justice Minister Cliff Cullen.

The election broke new ground for diversity. Manitoba has never had a black MLA but that changed Tuesday when the NDP's Uzoma Asagwara won.

The campaign was a calculated gamble for Pallister, who called the election more than a year ahead of the scheduled voting date.

It was a four-week summertime fight that offered few surprises and saw Pallister run a front-runner's campaign.

He participated in only one leaders debate and most of his campaign promises were small additions to measures taken in his first term.

The focus was on health care and money.

Pallister reduced the provincial sales tax by one point to seven per cent and fulfilled an election promise to reduce annual deficits, but his fiscal restraint has stirred up controversy.

Subsidies for everything from public housing to sleep apnea machines to physiotherapy have been cut. Three hospital emergency departments in Winnipeg have been downgraded and no longer handle life-threatening cases such as heart attacks.

The New Democrats had promised to reverse some of the changes.