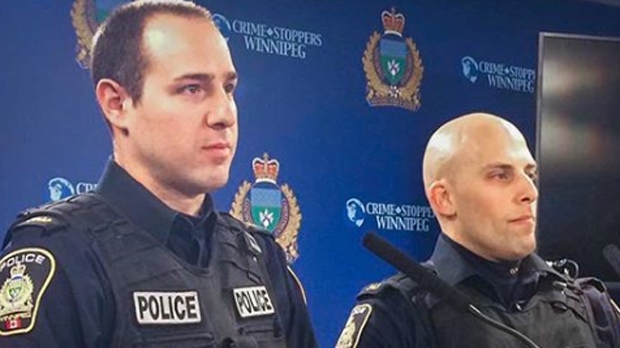 Bragnalo and Thompson received medals of bravery after saving a number of people from a burning condominium in Winnipeg in February 2017. (Source: Instagram/wpgpoliceofficial)

Four Manitobans received high honours in Ottawa on Tuesday for their acts of courage and exceptional contributions to society.

Gov. Gen. Julie Payette presented Meritorious Service Decorations, Decorations of Bravery and the Sovereign’s Medal for Volunteers to 40 recipients from across Canada at Rideau Hall.

According to a news release, these 40 Canadians were being “recognized for their excellence, courage or exceptional dedications to service.”

Nash received a Meritorious Service Decoration for sharing his message of hope with Canadian youth and his work playing concerts in schools, detention centres and other small venues where he speaks about suicide, depression, bullying, self-harm and addiction. Nash even has a tattoo on his arm with the names of fans who have given him discarded suicide notes.

Bragnalo and Thompson received medals of bravery after saving a number of people from a burning condominium in Winnipeg in February 2017. Thompson directed four people who were trapped on the second floor to safety by breaking down a door, and rescued a sleeping man on the third floor of the building by pulling him through a window. Bragnolo discovered two people who were trapped in a third-floor suite with windows covered by a locked metal security screen. The constable kicked open the screen and pulled the two people out the window. Despite the intensity of the fire, the two constables did a final sweep of the condo and rescued a final resident from the second floor.

Idonije, who came to Brandon, Man., as a child and now lives in Chicago, received a meritorious service medal for founding iF Charities, which helps disadvantaged youth in Chicago, Winnipeg and West Africa. Idonije’s charity has helped over 11,000 people develop social and emotional life skills.