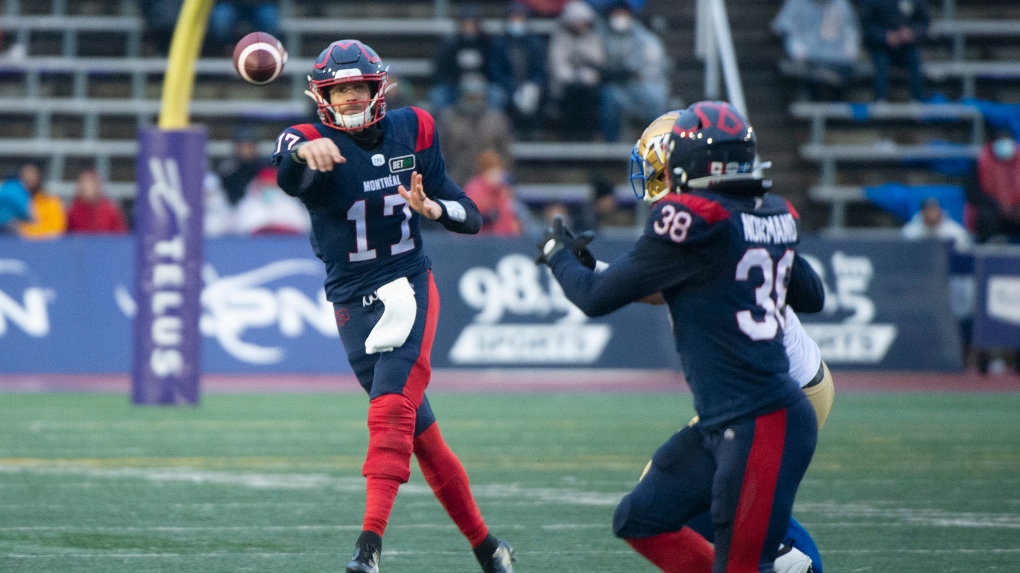 And the Alouettes took full advantage.

The Alouettes (7-6) conceded early, but regained the lead and held on at Percival Molson Stadium to pick up a crucial victory. David Cote added two field goals.

Filling in for CFL passing leader and Bombers No. 1 pivot Zach Collaros, Sean McGuire had a miserable afternoon in his first professional start. The 25-year-old threw for 149 yards and a TD, but was intercepted four times.

Battling with the Hamilton Tiger-Cats to host the East Division semifinal when the playoffs begin later this month, Montreal kick returner Adarius Pickett fumbled on the opening kickoff. The Bombers (11-2) recovered, and running back Brady Oliveira ran the ball into the end zone on the game's third play from scrimmage, but Winnipeg kicker Sergio Castillo missed the extra point.

Najee Murray then intercepted McGuire on Winnipeg's 20, and Harris made the Bombers pay with a 13-yard touchdown pass to Eugene Lewis for a 7-6 lead.

The Alouettes added to their lead when Harris found Lewis with a 10-yard touchdown strike in the second quarter. Lewis tied teammate Jake Weineke with a league-leading ninth touchdown of the season.

Cote kicked his first field goal in the third quarter to make it 17-7 for the home side.

Winnipeg returner Shaquille Cooper fumbled on a kickoff in the fourth quarter, and the Alouettes responded by taking a 24-7 lead with on Reggie White Jr.'s second TD in a Montreal uniform.

McGuire then tossed his first professional touchdown with an explosive two-play drive. The quarterback threw a 42-yard pass to Kenny Lawler and a 32-yard strike to Darvin Adams cutting Montreal's lead to 10 points.

But Cooper fumbled a second time on a punt return, and the ball rolled into the end zone, forcing the Bombers to concede a point.

Cote capped things by kicking his 30th field goal of the season to seal the 28-14 final.

Those with symptoms of depression more likely to believe vaccine misinformation: study

Adults with moderate to major symptoms of depression appear more likely to support false statements about COVID-19 vaccines and those who believe the misinformation have a higher probability of not being vaccinated, a new Harvard University-led study suggests.

Canada is doing all it can stop people smuggling across the U.S. border after a family of four froze to death in a 'mind-blowing' tragedy, Prime Minister Justin Trudeau said on Friday.