Hayes scores in OT to lift Jets over Blackhawks, 4-3 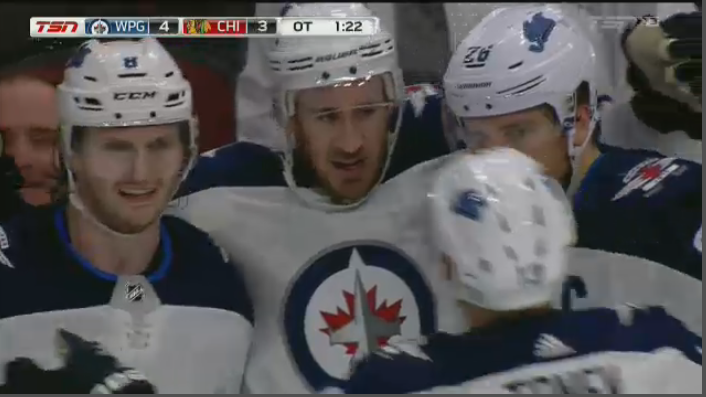 The Winnipeg Jets beat the Chicago Blackhawks 4-3 in overtime Monday.

CHICAGO -- Kevin Hayes and the Winnipeg Jets eventually got the two points they desperately needed.

Hayes scored at 3:38 of overtime as Winnipeg defeated the Chicago Blackhawks 4-3 on Monday night to snap a three-game slide and move into sole possession of first place in the Central Division.

Hayes cut to the net off the right side, got past Dylan Strome and tucked a shot past Corey Crawford. Winnipeg improved to 96 points, two ahead of St. Louis and Nashville atop the crowded division race.

"When you get to 3-on-3 (in overtime), it's a lot of open ice," said Hayes, whose 19th goal ended it. "Ultimately we got the two points and that's what we came here to do. It's one step toward finishing in first place."

Hayes came through after lingering on the ice longer than coach Paul Maurice wanted.

"It was really good, especially because his coach was screaming for him to get off the ice for about 30 seconds, until he went down and scored," Maurice said. "I love the confidence."

Strome, who hadn't scored in his past 12 games, netted his second goal of the game with 2:20 left in the third period to tie it at 3. By earning a point, Chicago avoided being eliminated from playoff contention for the second straight season -- for now.

"I know where we stand, but now is not the time to evaluate anything or summarize anything," coach Jeremy Colliton said. "I just want us to perform to our highest level. That's how we're going to move this thing forward."

If the Colorado Avalanche earn one point Tuesday against Edmonton, the Blackhawks are out the playoffs.

"We put ourselves in that situation," defenceman Duncan Keith said. "That's the tough part, knowing that we're in this hole. But there's nothing we can do about it now. Hopefully they lose, and hopefully we win the next game."

Strome, who also had an assist, beat goalie Connor Hellebuyck on the stick side from the slot after taking a centring pass from Jonathan Toews. Crawford was on the bench for an extra attacker.

Jack Roslovic scored two goals to end a 22-game drought, and Adam Lowry also had a goal for the Jets. Roslovic scored for the first time since Feb. 2 when he netted a hat trick versus Anaheim.

Toews had a goal and an assist for Chicago and set a career high for points with 78. The 30-year-old Chicago captain's 34th goal tied his best for one season, set in 2008-09.

Hellebuyck made 25 saves. Crawford stopped 34 shots, including Mark Scheifele's penalty shot 40 seconds into the second period, but Chicago lost for the third time in its last four.

The Jets, who have clinched a playoff berth, conclude the regular season with three more road games: at Minnesota, Colorado and Arizona. Both the Predators and Blues have three games remaining as well.

Before missing the playoffs last year, Chicago had a run of nine straight post-season appearances that included Stanley Cup championships in 2010, 2013 and 2015.

Toews opened the scoring 4:25 in with a power-play goal from the right circle. He beat Hellebuyck between the legs as Jacob Trouba screened.

Lowry tied it at 1 midway through the first on a shot from the left circle that slipped past Crawford on the short side.

Roslovic put Winnipeg ahead 2-1 with 34 seconds left in the period. After stealing the puck from Gustav Forsling, he connected on shot from near the goal line on the right slide that slipped between Crawford's pads.

Crawford made an easy save on Scheifele's penalty shot, awarded to the Jets' top goal scorer after Toews hooked him from behind on a breakaway.

Roslovic took Trouba's centring pass and made it 3-1 at 5:11 of the second on a quick shot from the slot that beat Crawford high on the glove side. Strome cut it to 3-2 just 1:12 later, scoring from the edge of the crease after he beat Winnipeg's Nathan Beaulieu to a loose puck.

Scheifele fired a shot past Crawford from the left circle with 3 minutes left in the third period, but the goal was disallowed after a video review showed the Jets entered the zone offside.