CAMPERVILLE, MAN. -- It’s been a week of chaos and concern for people living in a rural area south of Camperville, Man. where crews have been battling a wildfire since Sunday that now spans 23,000 hectares.

The province said crews are making good progress on the wildfire, with a line established to prevent it from spreading farther north.

For some people, help has been in short supply — prompting them to jump into action with their neighbours to save homes and property.

Over the past five days, Rural Municipality of Mountain resident Steven Winters has been scrambling to save his home and help the people living around his place.

“Living hell,” as Winters put it, with plumes of smoke filling the sky over his shoulder. “I started fighting fire on Sunday and by the looks of that we’re going to have to go over there.”

The wildfire has already ravaged his pasture and hay land. Despite the devastation on his property, Winters wants to go help his neighbours where he sees smoke in the distance. 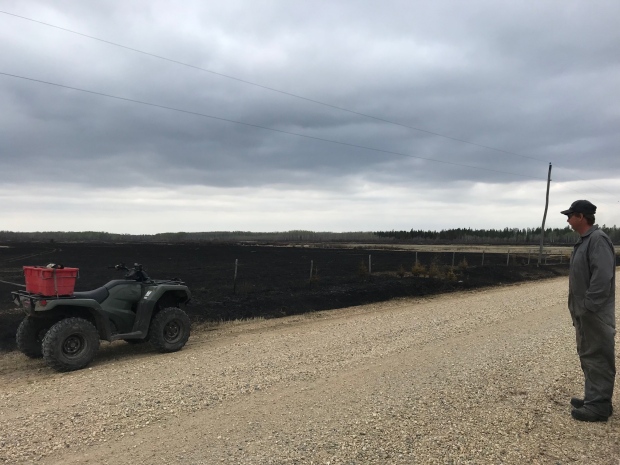 R.M. of Mountain cattle rancher Steven Winters surveys his wildfire-ravaged land. Nearly all of his 2,200 acres of land have been destroyed in the fire. Source: Josh Crabb/CTV News

He races down the road on his quad, towards their yard arriving at grain farmer Kati Blouin’s home.

Just across the road from Blouin’s place, crackling flames gobble up a field of dry grass, leaving behind charred, black land.

Area residents still stand guard with a truck, a tank full of water and a pressure washer just in case the wind shifts and the fire jumps the road.

“Because it’s unpredictable and it could blow into the yard at any time,” said Blouin.

Earlier this week orange flames lit up the dark sky around her yard as Blouin and her neighbours used their own equipment to battle the inferno to protect her family’s home.

“Definitely was initially expecting some help, with great big plumes of black smoke that were visible for miles,” said Blouin. “I was definitely expecting some people to come check things out and make sure we were okay.” 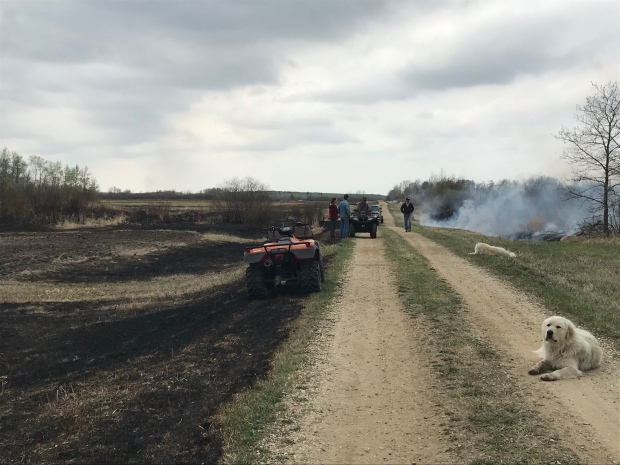 Area residents stand guard on a backroad with a truck full of water. They’re trying to make sure the fire doesn’t jump into the next yard where Kati Blouin and her family live. Source: Josh Crabb/CTV News

Volunteer fire departments from the R.M. of Mountain are part of the firefight. Reeve Robert Hanson said he understands residents’ concerns about having to fight the flames on their own but he points out the municipality covers a large area and crews are doing all they can.

“It’s hard for me to say yes, we have enough resources because we just were fighting two fires two days ago north of Birch River and we lost quite a few hoses burnt in that fire,” said Hanson. “We’ve got new hoses coming into Swan River today and the district fire chief is going to pick them up, put them on the one fire truck at Birch River and they’ll be coming to Camperville, Pine River area.”

“That’s a lot of those people’s livelihoods in this area and that’s our biggest concern and we want to get this all taken care of.”

A spokesperson said the incident management team is reviewing the risk of fire to property belonging to local residents.

R.M. of Mountain residents got some reinforcements from the nearby Camperville Fire Department which went outside its jurisdiction to help. But residents say for the most part they worked together on their own to save four homes including Perry Mason’s place.

“If it hadn’t been for the neighbours, that would be gone,” said Mason. “There’s no question about it.”

The fire’s still burning but the wind’s pushing it away from their homes, providing some much-needed relief.

For some the damage has been done. All but 50 of the 2,200 acres of grazing and hay land Winters relies on to feed his 75 head of cattle have been destroyed.

Best-case scenario, Winters said some of it may grow back within three weeks but that’s not guaranteed to happen. 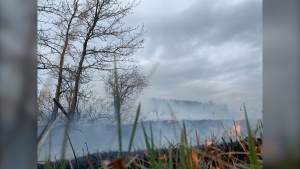 IN PHOTOS: Damage from the Camperville wildfire