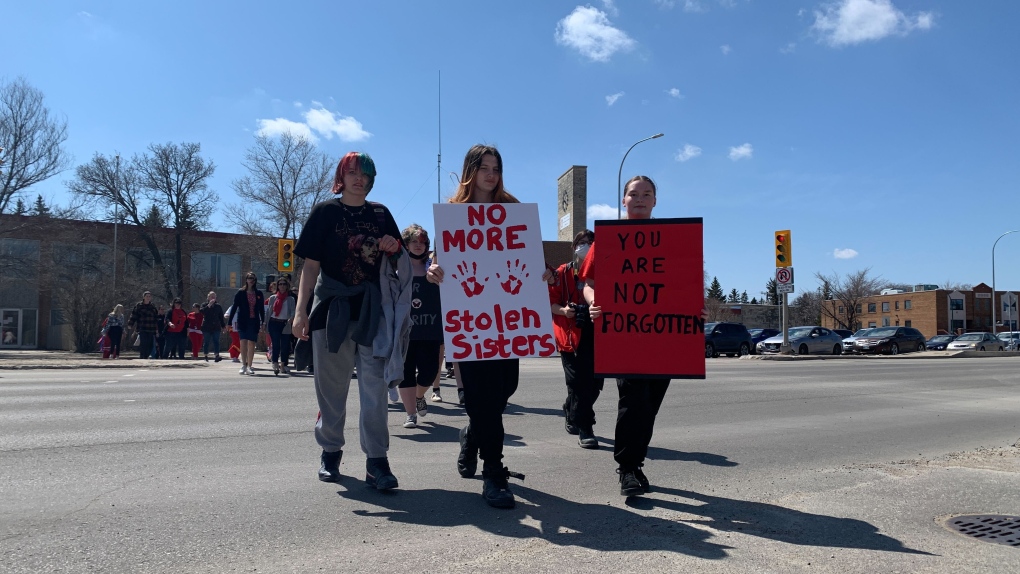 A group of students in Winnipeg marked the National Day of Awareness of Missing and Murdered Indigenous Women and Girls by marching on May 5, 2022. (Source: Jamie Dowsett/ CTV News Winnipeg)
Winnipeg -

Symbolic red dresses have been put up around the city to shine a light on the disproportionate violence that Indigenous women, girls and 2SLGBTQQIA+ people face.

A group of students in Winnipeg marked the day by marching to ensure people don't forget what is happening to Indigenous women and girls and two-spirited people.

"This was really overwhelming to see how many people decided to participate. I never expected so many."

Tara Tuchscherer, a teacher at St. James Collegiate, told CTV News the march is part of an entire week at the school meant to bring awareness to Missing and Murdered Indigenous Women and Girls, and raise funds for Drag the Red.

"A lot of people are unaware of the number of girls and women that are missing," Tuchscherer said. "We don't know what happened to them and their families are having to take it upon themselves to look for them and they need closure."

The province, which is set to project a red dress on the Manitoba Legislative Building Thursday night, said it is an occasion to remember those tragically taken by gender-based violence and to honour the ongoing healing of survivors, their families and communities who have lost loved ones.

To mark the occasion, people are encouraged to wear red or hang red dresses and ribbons as a visual reminder of the lives lost and to raise awareness about the ongoing fight against gender-based violence.

The Stefanson government noted in a news release its 2021 commitment to address violence against Indigenous women and girls by introducing amendments to the Path to Reconciliation Act, which established calls for justice from the National Inquiry into Missing and Murdered Indigenous Women and Girls.

“Addressing violence, in particular the incidences of missing and murdered Indigenous women and girls, is a priority for the province and it is our government's intent to continue to take action to prevent and combat gender-based violence of all forms,” the province said in a news release.

Meanwhile, the City of Winnipeg said it will mark the occasion with red dress displays at all Winnipeg Public Libraries until May 16.

Additionally, the city said it will host a ceremonial fire at Winnipeg City Hall from 10 a.m. to 11 a.m.

“We would like to acknowledge the tireless heart-work of the MMIWG2S+ Advisory Committee, and Implementation Team for their guidance as we find our way to walk together to stop and prevent violence to Indigenous women, girls and 2SLGBTQQIA+,” the city wrote on its website.

Crown counsel is seeking to revoke the prior order that granted bail for Tamara Lich, an organizer of the 'Freedom Convoy,' and says he will argue for her to be detained.

The gunman who attacked an Independence Day parade in suburban Chicago fired more than 70 rounds with an AR-15-style gun that killed at least six people, then evaded initial capture by dressing as a woman and blending into the fleeing crowd, police said Tuesday.

South Africa's president will attend the funeral Wednesday for the 21 teenagers who died mysteriously at a tavern last month.