'I hope that we made this day very special': German memorial honours lost war bomber crew

'I hope that we made this day very special': German memorial honours lost war bomber crew

Families of the crew of a Second World War bomber shot down over Germany in 1945 are finally getting closure for their long-lost loved ones after a local man with a passion for archeology created a memorial in their honour.

Erik Wieman, 54, has loved archeology since he found his first bronze-age axe as a kid growing up in Holland. But what had been just a hobby for many years is now helping to honour those who lost their lives during the war.

Wieman is part of a volunteer group in Germany that has put together a memorial at the crash site of Royal Canadian Air Force (RCAF) Halifax bomber NP711, shot down near Leistadt, Germany on Feb. 21, 1945. All seven crew members died.

On Saturday, Aug. 6, 2022, ten descendants of that crew were at the crash site honouring the men who died there. Wieman says people travelled from Canada, the U.S., the U.K., and Saudi Arabia to attend the ceremony.

"They were very thankful, and I think they had a really great day," said Wieman. "When they come from so far away, we have to make it worthwhile for them." 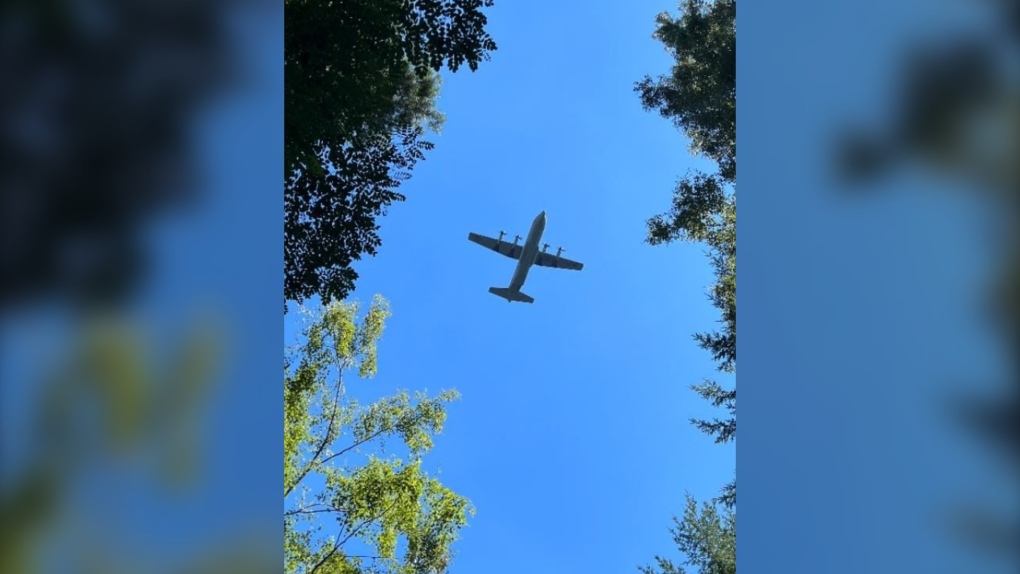 A C130 Hercules performs a flyby over the memorial for the lost crew of RCAF Halifax bomber NP711. (Source: Erik Wieman)
The memorial consists of a large stone weighing almost 3 tons with a plaque on it naming the seven crew members. An informational display tells the story of the crash in both English and German for local passers-by.

Around 90 people attended the memorial ceremony Saturday, including a 96-year-old German man who had been forced as a teenager to shoot down Allied planes during the war. Wieman says it's important for everyone to remember those who died.

The ceremony featured a flyby from two military aircraft, a Second World War-era Douglas DC-3 - whose appearance was sponsored by German TV star Michael Manousakis – as well as a more modern C-130 Hercules from nearby Ramstein U.S. Air Force base.

"It was perfect for the descendants," said Wieman, "They just looked up and saw this last salute from the air, it was amazing!"

He says the memorial site is already serving its purpose. "The day after the ceremony I was there, just cleaning up … a lot of people were standing at the memorial, reading the information display, they were very astonished." Wieman has also created a memorial walk, mapping out a specific hiking trail to and from the crash site.

Wieman has created a memorial walk to honour the crew of Royal Canadian Air Force (RCAF) Halifax bomber NP711. (Source: Erik Wieman)
He says he could not have done any of it without help.

"I want to thank everybody who helped to make this work. I want to thank the descendants who made a long trip to be here, and I hope that we made this day very special for them."

Brazil's top two presidential candidates will face each other in a runoff vote after neither got enough support to win outright Sunday in an election to decide if the country returns a leftist to the helm of the world's fourth-largest democracy or keeps the far-right incumbent in office..