'If the Jets can play, we can play': Group protests health orders during Jets season opener 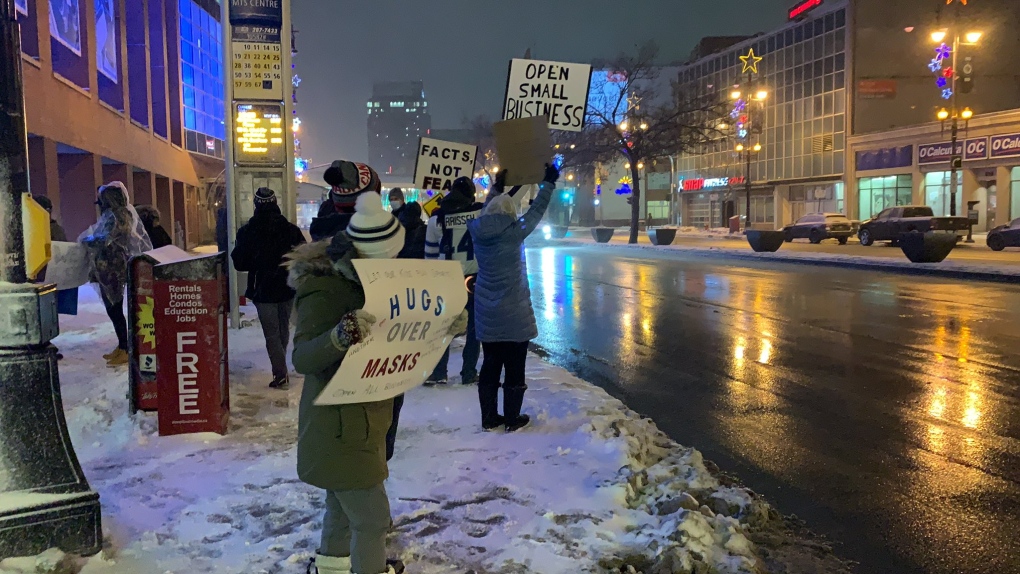 WINNIPEG -- As the Winnipeg Jets officially opened their season at an empty arena in Bell MTS Place, a small crowd gathered outside to protest code red restrictions – which led to at least one person being handed a ticket for nearly $1,300.

On Thursday evening, about 20 people gathered on the sidewalk along Portage Avenue, for the protest which was dubbed the 'Puck Drop Freedom Rally', calling for the province's current round of health orders to end.

The health orders, which have been extended to Jan. 22, limit private gatherings at residences to household contacts only, and restrict retail businesses from selling non-essential items in-store.

The latest round of health orders did make an exemption to allow NHL hockey to move forward, which paved the way for the Jets' opener against the Calgary Flames on Thursday night.

"If the Jets can play, we can play. They're at work, let us go to work," said Patrick Allard, one of the protesters. "No masks on the ice, no social distancing on the ice, but yet we can't even get together with our friends for dinner."

Allard told CTV News he was handed a ticket for $1,296 for violating public health orders right after the protest ended. He said he plans to fight the ticket in court.

Allard said at least two other people at the protest were also ticketed. 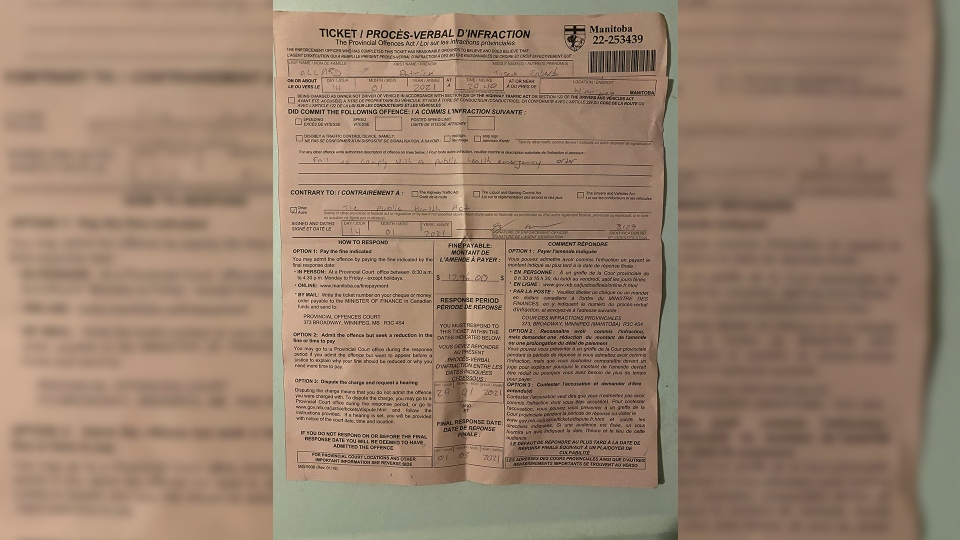 Dr. Brent Roussin, the chief provincial public health officer, has previously said the restrictions were eased for the Jets due to the strict protocols put in place by the NHL.

A spokesperson for Premier Brian Pallister told CTV News the code red restrictions are making a difference in the province's case numbers.

"The current public health orders – which were put in place to reduce case numbers and save lives - are working, thanks to the willingness of Manitobans to follow them," Pallister's spokesperson said. "We recognize these past few months under level ‘red’ restrictions have been difficult and we all look forward to when we can start to reopen our economy and communities, safely and in a sustainable way."

While multiple police cruisers were on the scene of the rally Thursday night, no officers appeared to interact with any of the protesters during the gathering.

In a statement to CTV News, a provincial spokesperson said there will be an enforcement presence at large public gatherings or rallies they are aware of.

"People in violation will be subject to fines, and we encourage Manitobans to refrain from taking part in these types of events," the spokesperson said.

This story will be updated as more details are provided.

-with files from CTV's Rachel CrowSpreadingWings