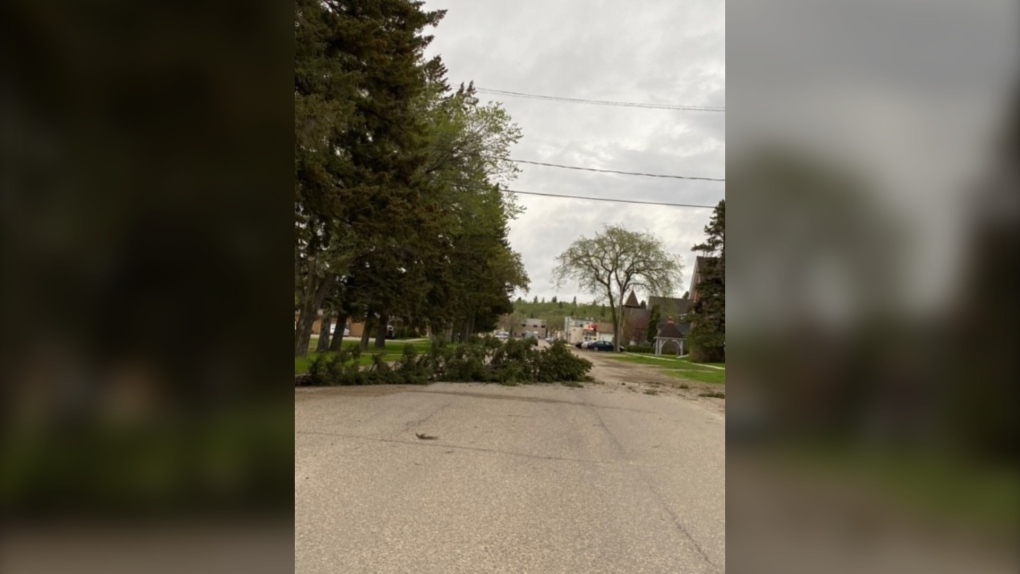 A tree blown over by the wind in Minnedosa. (Source: Ray Baloun)

An “intense” low-pressure system is bringing heavy rain to southern Manitoba on Tuesday, according to Environment Canada.

The weather agency issued a rainfall warning for several regions of the province on Tuesday, saying many areas have already been hit with 30 to 50 millimetres (mm) of rain; however 20 to 30 mm are still expected.

As the morning progresses, the heavy rain will lighten up, and eventually leave the region by evening.

Environment Canada noted that the rain will be accompanied by wind gusts of 80 to 90 km/h, which could make outdoor activities unsafe.

Drivers are reminded that if visibility is reduced, they should slow down, watch for tail lights and be prepared to stop.

Drivers should also be aware of traffic closures.

According to the Winnipeg Police Service, the McPhillips Street/Logan Avenue underpass is closed to traffic due to the accumulation of rainwater and stalled vehicles.

The rain might also bring flooding to low-lying areas.

Environment Canada has also issued a wind warning for a number of southern Manitoba communities, saying a “powerful” Colorado low is bringing northerly winds of 60 to 90 km/h.

The severe winds are expects to diminish by Tuesday afternoon as the low moves into Ontario.

Former U.S. President Donald Trump says in a lengthy statement that the FBI is conducting a search of his Mar-a-Lago estate.