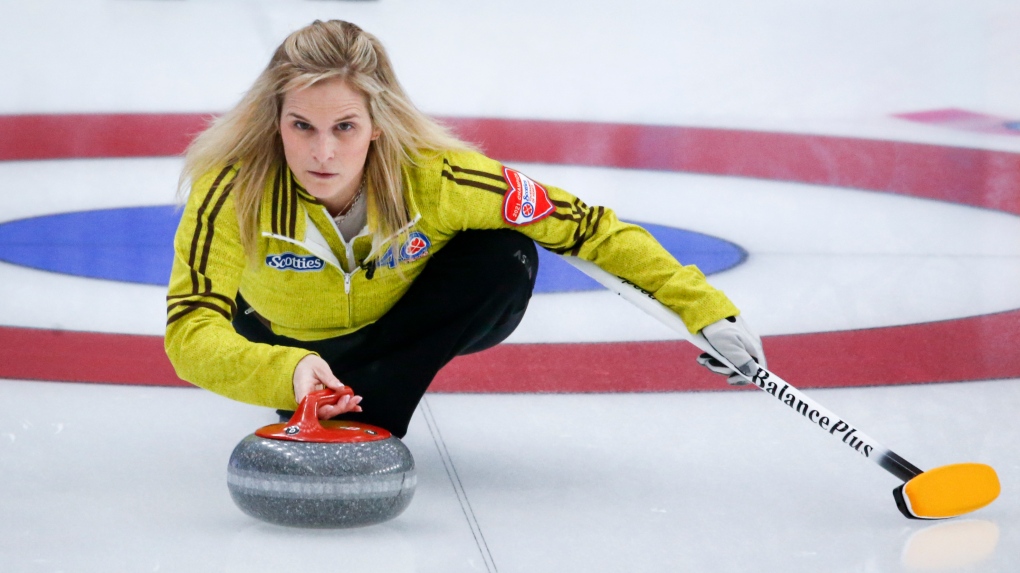 Jennifer Jones won the women's title at the inaugural PointsBet Invitational Sunday with a 7-4 win over Casey Scheidegger in the final.

The victory was worth $50,000 for Jones, Karlee Burgess, Mackenzie Zacharias, Lauren Lenentine and alternate Emily Zacharias at Willie O'Ree Place in Fredericton.

Jones and company strung together four straight wins to claim the title and take home the winner's cheque.

They're a new team this season with 48-year-old Jones, a 2014 Olympic champion and two-time world champion, skipping under-25 teammates, who won Canadian and world junior titles two years ago.

"We felt (chemistry) instantly, and I wasn't sure because they were already an existing team, and I'm just a couple of years older than them, so I wasn't sure how that would all work," joked Jones.

"I honestly feel like it's so easy. They're easy to be around, and I feel like we've just become one united team, which is crazy because it's only September."

Jones was the No. 5 seed taking on No. 6 Scheidegger on Sunday, although Kristie Moore filled in at skip for the absent Scheidegger.

After blanking the first end, Jones scored two in the second and added deuces in the fourth and eighth ends, while holding Moore to single points with hammer.

"They made a lot of great shots and I just didn't finish in a couple of ends, most definitely," Moore said.

"In the past couple of games, I got opportunities later. But Jen just didn't let us get back in there."

Jones is working on a 12-game winning streak with her new team dating back to the Saville Shoot-Out in Edmonton earlier this month.

The team went 8-0 and beat Rachel Homan in the final there.

Jones' vice-skip Zacharias, who throws second stones, says she and her teammates are thriving with Jones calling the shots.

"She's been such a great leader for our team and we're so privileged to have a chance to play with her," Zacharias said.

"We're all just having fun out there as well, which is the icing on top of the cake."

The 23-year-old switched to front end after previously skipping the team.

"I've had a couple of tournaments now to kind of figure it out," Zacharias said. "There wasn't a whole lot that's changed, but sweeping was probably the biggest thing for me.

"I hadn't really swept before, but I'm on a team with some amazing sweepers. They were able to give me some good pointers, and we've had a few people come out and teach me as well."

This report by The Canadian Press was first published Sept. 25, 2022.

CTV News in Pakistan: Afghans forced out of their homeland now homeless

CTV National News Executive Producer Rosa Hwang shares what she witnessed during a visit to a refugee camp in Pakistan, where Afghan children live in flimsy tents set up in a park, without the basics like running water or enough food, with only their mothers for protection.

Ten food trend predictions for 2023, according to Yelp

What trendy things will we be eating and drinking next year? Predictions for the top 10 food and beverage trends of 2023 were revealed recently by review site Yelp.

When a B.C. metal artist was asked to create a giant sculpture with Elon Musk's head on the body of a goat riding a rocket he had no idea who would want to create such a thing or why.

San Francisco will allow police to deploy robots that kill

Supervisors in San Francisco voted Tuesday to give city police the ability to use potentially lethal, remote-controlled robots in emergency situations -- following an emotionally charged debate that reflected divisions on the politically liberal board over support for law enforcement.

Thousands asked for it while he was leader and now Jason Kenney has done it, announcing his resignation as a member of the Alberta legislature on social media Tuesday.