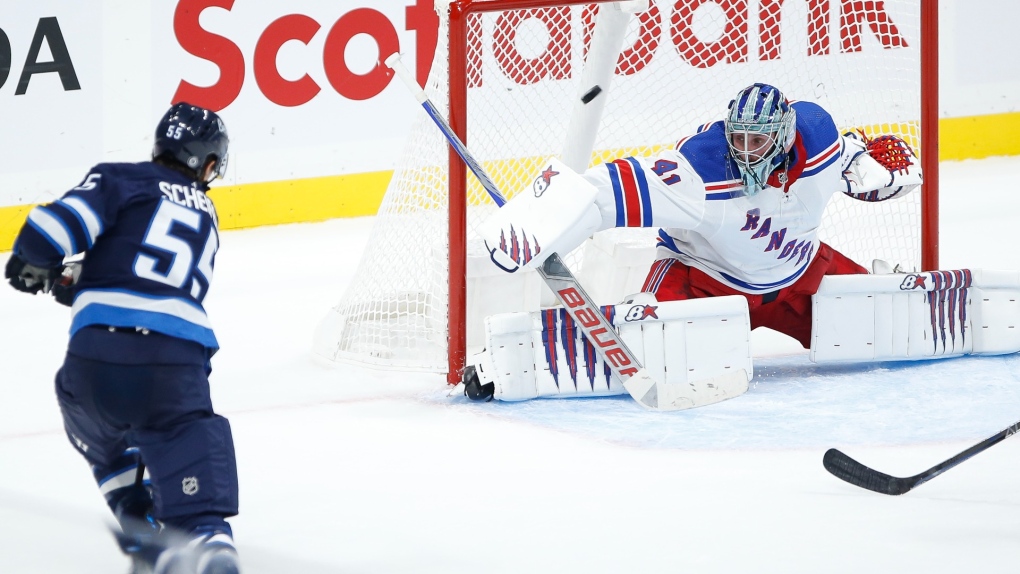 WINNIPEG -- Connor Hellebuyck viewed the Winnipeg Jets' 4-1 season-opening victory Friday over the New York Rangers as a taste of what could lie ahead.

Mark Scheifele scored a first-period goal at even strength and then added a power-play marker at 18:23 of the third period. His second goal was one of three the Jets scored in the final five minutes of the third. Hellebuyck stopped a barrage of 21 shots in the second period and finished with 40 saves in front of 14,553 fans at Canada Life Centre.

"This team played the right way," Hellebuyck said. "It was a great team win tonight, and we needed everyone and we got everyone.

"It's a great building step and I think the character in this locker room is just going to continue to show and grow."

Veteran forward Sam Gagner, who signed with the team Sept. 2, made it 2-1 at 15:35 of the third period. Kyle Connor added an empty-netter with 20 seconds left.

Dryden Hunt tied it 1-1 early in the third for the Rangers (2-1-0), who were playing the second game of a back-to-back set that began with a 7-3 victory on Thursday in Minnesota.

The game was supposed to be the debut of new Jets head coach Rick Bowness, but the team (1-0-0) announced earlier in the day that the 67-year-old had tested positive for COVID-19. Associate coach Scott Arniel ran the bench.

"Not the way I dreamed it up but, yeah, just at the end of morning skate Rick wasn't feeling great and called me around 3:30, 4 o'clock and was just, obviously, it had hit him pretty hard," Arniel said.

Ehlers raced behind New York's net, got the puck and sent a backhand pass up to Scheifele in the circle, who beat Halak at 10:29 of the first period.

"(Hellebuyck) made some big saves when we needed him to and then, in the third period, we got back to our game and we got pucks deep and we're a pretty tough team when we do that," Scheifele said.

A minute earlier, Hellebuyck showed his quickness with his blocker.

As Rangers forward Artemi Panarin came out of the penalty box for slashing, he grabbed a pass and went at Hellebuyck on a breakaway but his backhand shot was deflected.

The Jets outshot the visitors 13-10 in the opening period, but the tables turned in the second frame.

Hellebuyck had to stop 21 shots in the second, but Halak only needed to turn aside seven.

"We were not great in the first," Rangers coach Gerard Gallant said. "I thought we played a real good second. And then in the third, I think we ran out of gas so we made a lot of mistakes in the defensive zone, which usually happens from mental mistakes and tired mistakes.

"We created a lot of chances, but we just gave up way too much."

Hunt tied it at 3:55 of the third after he controlled a pass from Trocheck that hit his skate, moved the puck to his stick and beat Hellebuyck from the right side of the net. Panarin also picked up an assist.

"It's two pretty good players so I just tried to get open," Hunt said of his teammates. "When you get an opportunity like that, especially with coming into the lineup, you kind of want to make the most of it."

Trouba, who played 408 games with the Jets before being traded to the Rangers in June 2019, was booed early in the game by some fans when he had the puck.

"It doesn't really bug me, I guess. It just is what it is," Trouba said of the heckling.

NOTES: Panarin now has a goal and five assists through three games. The last Rangers player to record five or more assists through the same span were Mark Messier and Brian Leetch in 1992-93 ΓÇª The Lady Byng Trophy, which Kyle Connor won last season, was in Canada Life Centre so fans could take photos with it.

The Jets embark on a three-game road trip, starting Monday against Bowness's former team, the Dallas Stars. The Rangers return home for four straight games, beginning with a Monday match against the Anaheim Ducks.

This report by The Canadian Press was first published Oct. 14, 2022.