Jets goalie Pavelec out Monday, not clear how much longer 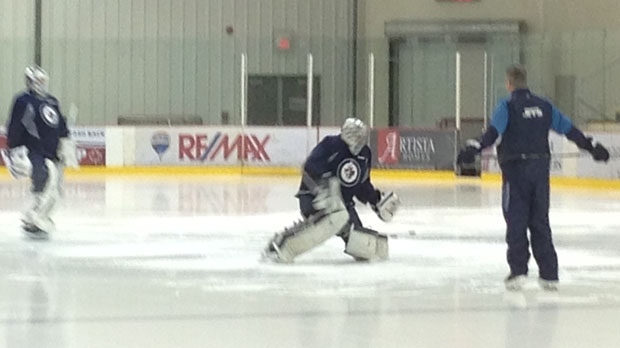 Injured Winnipeg Jets goalie Ondrej Pavelec won't be in the lineup Monday night against the Colorado Avalanche, but it's unclear how much more time he will miss.

Pavelec suffered a lower-body injury late in the second period of Saturday's game against Arizona when Coyotes forward Shane Doan collided with him while driving the net on a partial breakaway.

Winnipeg Jets head coach Paul Maurice said the team is waiting to find out more from doctors about the severity of Pavelec's injury.

Pavelec initially stayed in the game but didn't return in the third period.  He was replaced by Michael Hutchinson in the final frame in a game the Jets went on to win 3-2.

Pavelec was seen leaving the rink Saturday night on crutches, but Maurice said that's not necessarily an indication of how severe the injury is. He said Pavelec may have just been trying to keep pressure off the injury.

The Jets have called up Manitoba Moose goalie Connor Hellebuyck to serve as Hutchinson's backup for the timebeing.

Maurice said if Pavelec's out for any duration of time, he plans on getting Hellebuyck into game action.