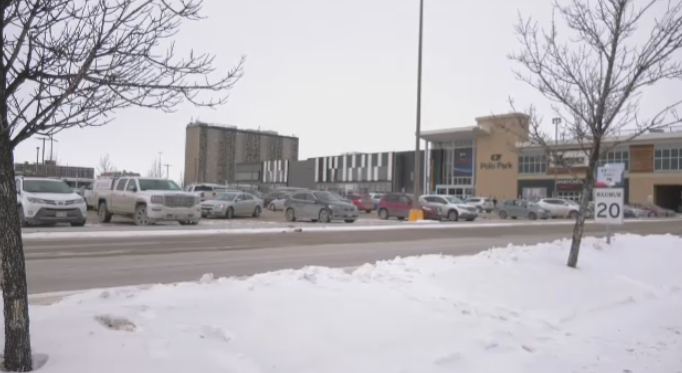 The Winnipeg Police Service said they were called to a carjacking at the St. James-area mall just after 12:30 a.m. Tuesday. (File Image)

WINNIPEG -- A 21-year-old woman is facing charges after police say a security guard at CF Polo Park had his vehicle stolen during overnight patrol.

The Winnipeg Police Service (WPS) said they were called to a carjacking at the St. James-area mall just after 12:30 a.m. Tuesday.

According to police, the victim was a security officer responsible for the shopping centre and was driving a marked security vehicle during patrol.

The victim told police a person jumped on the hood of the vehicle while he was making his rounds and then got into the vehicle using the passenger door. The guard got out and attempted to remove the suspect from the vehicle. However, the suspect shoved the victim to the ground, police said.

The suspect then moved over to the driver’s side and drove away, hitting the victim’s arm with the vehicle in the process, which caused a minor injury, police said.

According to WPS, the vehicle was then tracked using its GPS, and officers found it being driven by the suspect in the North End.

Police say they stopped the vehicle at McGregor Street and Mountain Avenue, and the suspect was taken into custody.

A 21-year-old Winnipeg woman is charged with robbery, possession of a scheduled substance (methamphetamine) and dangerous operation of a conveyance.

WPS said she remains in police custody with her disposition pending.

The charges against the woman have not been proven in court.