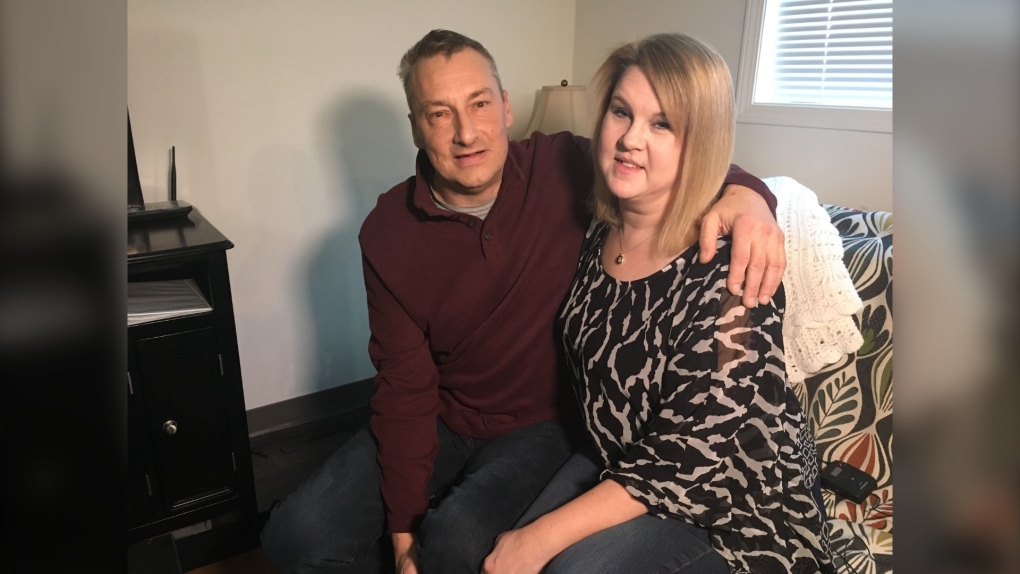 Steven Hay's wife Lora was supposed to donate one of her kidneys to him in September 2019. (Michelle Gerwing/CTV News)

A Rapid City, Man. couple who were forced to miss a scheduled transplant date would like to see improvements to the home hemodialysis machines used in the province.

Steven Hay has kidney failure due to type-one diabetes. His wife of 25 years Lora was supposed to donate one of her kidneys to him in September 2019.

“We were two days away from our donation, our kidney transplant,” Lora explained. “But his hemoglobin was so low that we couldn’t go forward with the transplant.”

The Hays believe Steven’s low levels were caused by the home hemodialysis machine he had been using for the year and a half leading up to the transplant date.

“I think if we had known 2 years ago what we know now, we probably would have just stayed in Brandon in clinic,” said Lora.

Two years ago, Steven said it was suggested to him to try home hemodialysis.

They signed up for the program and Steven took the 4-6 week training at Seven Oaks Hospital, but once they brought home the machine -- called NxStage -- the couple said an alarm on it went off frequently, and technicians from the Manitoba Renal Program would have to come out to service it.

“It codes constantly and it’s not returning his blood, why it’s not doing that we don’t know,” said Lora. 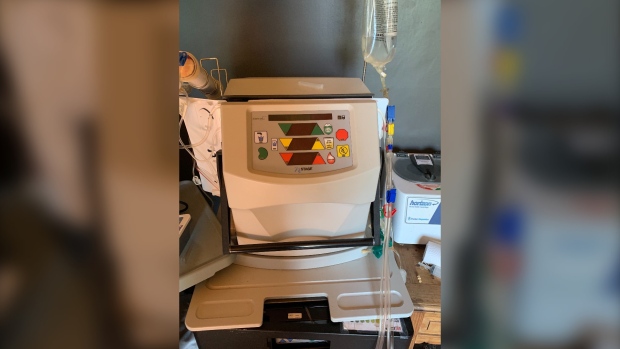 The Hays submitted this photo of the NxStage to CTV News.

Sometimes Steven said problems would happen so often that a four-hour session would take twice the time.

“We think with the right machines, it is great program,” said Lora.

The Manitoba Renal Program could not comment on specific cases but told CTV News generally people are happy with their experience with home hemodialysis.

“Some patients go a long time without any issues, some have them more frequently,” said Dr. Sushil Ratnaparkhe, the medical director of the home hemodialysis program for Seven Oaks Hospital. “We are never happy when patients are having concerns and issues, and we try to resolve those as best as we can.”

The Manitoba Renal Program itself provides technical support, repairs and replacement for patients and staff are on call for service.

“When patients have issues they go out and bring the machines in and inspect them,” said Dr. Ratnaparkhe. “Sometimes all that is required is the replacement of a part or the machine as a whole needs to be replaced, but it really does vary. We do make those repairs or replacements where necessary.”

In some cases, and MRP spokesperson said in a statement that equipment does need to be sent back to the manufacturer for calibration and replacement.

Dr. Ratnaparkhe said for patients who are not on municipal water, the NxStage machine is the only option because it is a self-contained unit, meaning it filters the water it uses itself.

“Having said that, like any machine it’ll have its issues and we are constantly evaluating new technologies, there are more machines coming on the market,” he said.

"The NxStage System One is currently being used by more than 100 people in Manitoba and we have over 10,000 patients using our machines worldwide. NxStage home hemodialysis machines have a solid track record of performance and reliability, with many patients now exceeding a decade or more on the therapy. We offer pre-packaged bags of dialysate when access to appropriate water is unavailable, or suggest the use of a more advanced pre-treatment water filtration system. We also offer a swap program to quickly exchange machines so patients do not miss a treatment.”

Dr. Ratnaparkhe also said if a patient is not managing well at home anymore and it is not considered safe, they would be asked to do in-hospital dialysis until the issue is sorted out.

The Hays suspect their water quality may have affected the function of the machine.

“They had a special filter and even with that special filter it just caused havoc with my machine. It wasn’t working right. It was alarming all the time; I tried to do night dialysis so I would have my days, and it would keep me up all night and I would not go to sleep because it just continually alarmed,” said Steven.

Steven is back in clinic, but not in Brandon.

“There’s not one spot in Brandon,” said Steven, “I have to drive three hours one way to get dialysis versus 20 minutes. So that is six hours a day driving to get dialysis three times a week.”

The Manitoba Renal Program told CTV News that over the past two years patient volumes have grown rapidly. The Prairie Mountain Health Region is working to increase capacity in multiple ways. One is doing dialysis seven days a week, instead of its previous practice of six days a week.

The Hays say their issue is not with the people or the service they were given while on home hemodialysis.

“The technicians from Seven Oaks were so good, they were out there that day if there was a problem,” said Steven.

The Hays are hoping to take a second attempt at a kidney transplant in February or March.

“We’re keeping our fingers crossed that his hemoglobin will continue to rise because he’s in clinic,” said Lora.