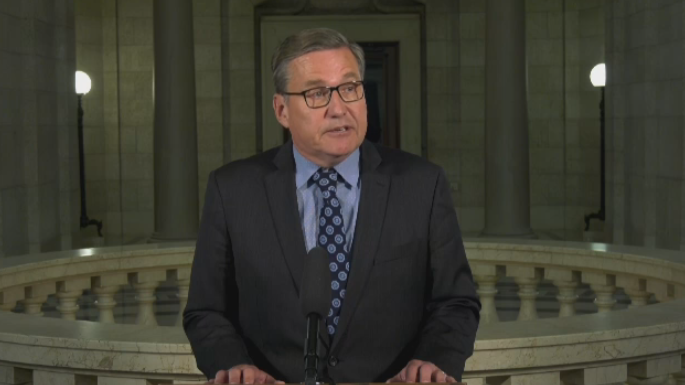 Manitoba's Transportation and Infrastructure Minister Doyle Piwniuk is facing criticism for granting a road access permit to a Brandon developer despite concerns raised by his own department it will lead to an increase in collisions.

On Tuesday, Piwniuk responded to concerns raised by the Opposition NDP, arguing safety issues will have to be addressed by the applicant.

The proposed access is located along Highway 10 south, also known as 18th Street in Brandon, as part of a mixed-use development which is set to include commercial and residential buildings.

The application was previously denied by Manitoba Transportation and Infrastructure due in part to safety concerns but documents obtained by CTV News Winnipeg show the minister signed off on an appeal of that decision on Aug. 3.

Matt Wiebe, the NDP's Transportation and Infrastructure critic, questioned the move during question period in the Manitoba Legislature.

"At the end of the day the department said clearly that it's unsafe for them to put in this access point, and yet the minister overruled that decision and went ahead anyway and is pushing this development through,” Wiebe told reporters following question period.

Piwniuk defended the decision. The minister argued the government is focused on economic development and he said approving the access will allow Brandon to expand its footprint.

Staff in his own department raised concerns allowing the additional access along the highway could lead to a higher potential for more severe collisions. The department suggested allowing road access off an existing road that connects to Highway 10.

To address safety concerns, Piwniuk said speed limits may be reduced. He also said the developer – VBJ Developments – will have to provide a traffic impact study that jives with the province's future plans for a bypass in the area.

"The thing is they have to get an engineering study,” Piwniuk said. “They also have to do a design and then we also, in our department, have to make a design to make sure that they match up together so that there's safety for people from Brandon."

The NDP has suggested the decision was made because the developer donated to Premier Heather Stefanson's leadership campaign and to the Progressive Conservative party.

Steve McMillan, vice president of planning services with VBJ Developments, didn't address that claim specifically but he said in an email the company is excited to move forward with its project with the support of the City of Brandon and the province.

McMillan said granting access off 18th Street will allow it to move forward with the next steps in the planning process.

According to the City of Brandon, council still has to approve the project.

Brandon Mayor Rick Chrest said the project’s been in the works for some time and he said the city has supported the road access.

Chrest said the area will eventually take on more of an urban profile as compared to being solely a highway.

Brandon city council also recently approved borrowing $30 million for upgrades to water and wastewater utilities to service growth in the southwest area of the city, a move which would nearly double some people's water bills by 2026.