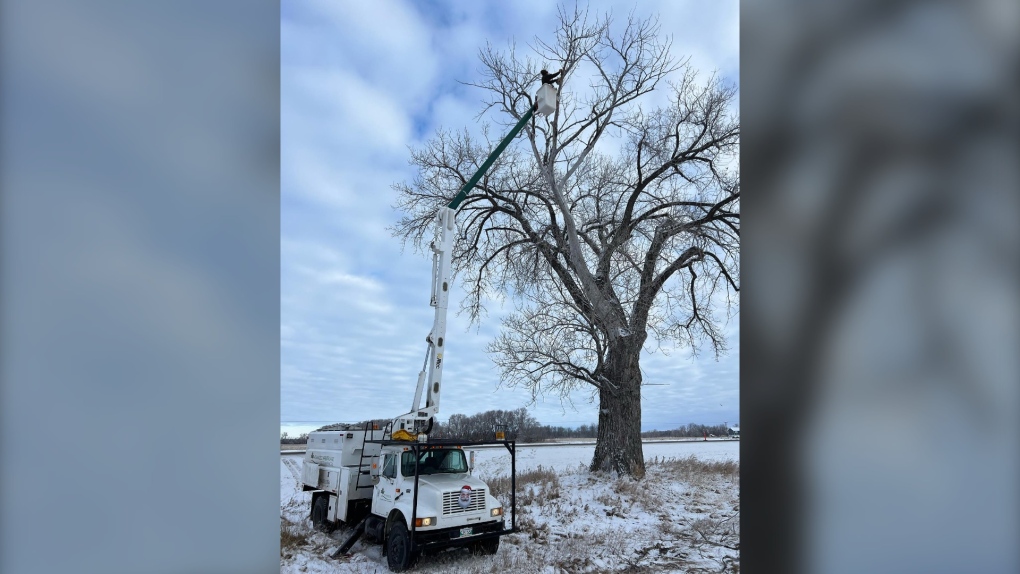 An arborist working on the century-old iconic Halfway Tree along the Trans-Canada is asking Manitobans not to panic – the tree is not coming down, just getting a face-lift.

Shawn Richardson, owner of Advanced Arborcare Tree Services, was out at the Halfway Tree with his crew Tuesday to do some work on the tree.

"We figured there would be quite a few people that would be worried about it because all Manitobans or most Manitobans know that tree and it's pretty iconic in Manitoba," he told CTV News.

"I made a post on our Facebook page, just to let everybody know that we're just getting that big dead lead on the tree, not taking the whole thing down, to kind of reduce the panic."

Earlier in the fall, the cottonwood tree, which stands about 85 feet tall, had an arborist assessment completed. The report found the tree is about 100 years old and is declining. It found one of the tree's two main trunks had died a while back.

READ MORE: What an arborist says about the future of Manitoba's iconic Halfway Tree

Richardson said the province contracted him to remove the dead trunk from the tree to mitigate risk, as it could be a safety hazard to the many people that visit the tree.

He said because the trunk was already dead, removing it does not have an impact on the health of the rest of the tree.

"It's more just to get rid of the problem of the dead branch hanging up in the tree," he said, adding that was the extent of the work the province had asked for.

"There is some more dead branches, smaller branches on the east side of the tree, but they don't want to do too much work to it, just to let it take its natural course."

A provincial spokesperson previously told CTV News in September that when the tree does eventually die, it can't be replaced.

"We hope that those concerned with the health of these large trees understand that it is not possible to plant new trees that are in close proximity to the highway as they could pose a safety risk to the travelling public," the spokesperson said in an email.

However, Richardson said the tree still has years to live, granted there is no damage caused to it by windstorms or wet snow.

"A lot of people are worried that the tree is going to die," he said. "It is, from what I've kind of gathered, a 100-year-old tree, which for a cottonwood is a pretty long life span. But it does have a lot of live foliage on it."