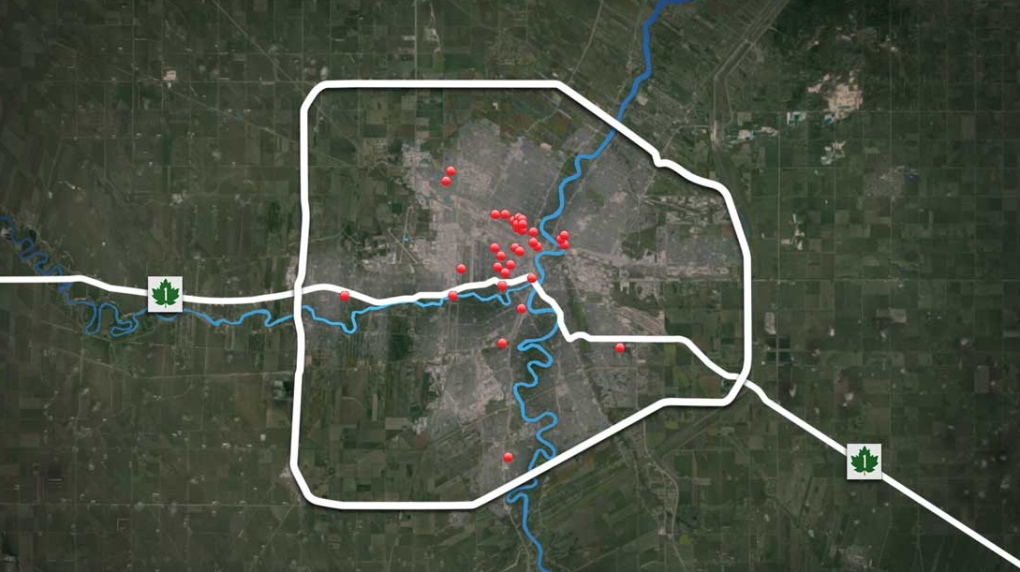 A look at the approximate locations of all 36 homicides in Winnipeg so far this year, as of Oct. 28, 2019 (Source: CTV News Winnipeg)

WINNIPEG – There have been thirty-eight homicides in Winnipeg so far this year – yet another person closer to a record number of homicides in one year, Winnipeg police said.

Police said of all the homicides this year have been un-related to each other – with the exception of two cases of separate double homicide investigations.

Const. Rob Carver with the Winnipeg Police Service said in a number of the homicides - the drug-trade, gang violence, and methamphetamine have played a roll. Though carver said the connection is “tenuous.”

“There is no particular theme,” Carver said.

Carver said the number of homicides this year is taking a toll on the whole Winnipeg Police Service – not just homicide investigators.

“I think at some point, it is just impossible to continue the sort of pace we’ve done without it starting to effect people on an individual and team level,” Carver said.

Each homicide impacts Winnipeg police members, Carver said, from the general patrol officers first on the scene to the officer reading the homicide report.

“I can tell you first responding officers will be left traumatized, probably for the remainder of their lives for some of the stuff they show up at,” Carver said. “Breaking the news to the family is traumatic, tragic, and the family has to live with that every day and will for the rest of their lives.”

Each time a person is killed, Carver said their deaths touch everyone in the city in different ways.

EACH HOMICIDE IS A VICTIM, NOT A NUMBER, POLICE SAY

“There are a lot of homicides in this city,” said Const. Rob Carver with the Winnipeg Police Service. “Every homicide is a victim. It is a tragedy for the family and the community.”

With these tragedies, Carver said the language we use when describing them is important.

“It pains me to have to reference someone who has been murdered by a number,” Carver said, adding that referring to a murder victim with a number is not appropriate and it does not do justice to the victim or the family.

After a shooting at a nightclub early Saturday morning left one man injured and another dead, police said Winnipeg’s total number of homicides is now up to 38 so far this year.

CTV News Winnipeg has tracked the approximate location of each homicide in the city, with facts on each case and links to additional coverage.