The Manitoba government has released new data providing further insights into the province’s breakthrough COVID-19 cases, including which vaccine types and age groups are seeing the most cases post-vaccination.

On Monday, the province released its latest respiratory surveillance report, which includes information on COVID-19 cases after full vaccination from Dec. 16, 2020, to Oct. 16, 2021.

The numbers show that more than half of Manitoba’s breakthrough cases among fully vaccinated individuals were in people who received the Pfizer vaccine, while 32.3 per cent were in Manitobans who received Moderna doses.

It’s important to note that more Manitobans are eligible to receive the Pfizer vaccine compared to any other type, as it’s the only vaccine available to those aged 12 to 17. The province has also received a lot more Pfizer doses than any other vaccine.

According to a provincial spokesperson, almost one million eligible Manitobans have received two doses of the vaccine.

Overall, experts say the numbers highlight the protective value of getting immunized and that the vaccines are working.

“In this time period there were, for example, 729 deaths (overall) and 22 deaths occurred in fully vaccinated people,” said Cynthia Carr, a Winnipeg-based epidemiologist and founder of EPI Research. “Three per cent of all deaths in this 10 months was amongst people who were fully vaccinated.”

AGE GROUP AND SEVERITY OF CASES

In terms of which age group is seeing the most breakthrough cases, it was fairly evenly distributed.

According to the province’s data, 18.6 per cent of breakthrough COVID-19 cases were among fully vaccinated Manitobans between the ages of 30 and 39, while 16.5 per cent were aged 40 to 49.

Carr said there are still different levels of risk, even among fully vaccinated people, depending on variables including age and health status.

“Everybody has benefited but you can see from the data in terms of the worst health outcomes—hospitalizations, ICU admissions, deaths—those still tend to be significantly in our elderly population that we want to continue to focus on, keep safe.”

Jason Kindrachuk, a virologist and Canada research chair in emerging viruses, said the numbers aren’t surprising because vaccines have clear benefits in protecting you from infection and severe outcomes even though there are limitations.

“The vaccines actually do have a protective effect against infection,” Kindrachuk said. “It’s not 100 per cent but it also is not zero. So when we think about this idea of what the vaccines are doing and what they can and can’t do we can’t get into this kind of mindset of thinking it’s either yes or no.”

The effectiveness also depends on variables such as age, underlying conditions, the type of vaccine and transmission in the community, Kindrachuk said.

Just under half of the severe breakthrough cases were in Manitobans over the age of 70 and 23.5 per cent were in those between the ages of 60 to 69.

The other age groups each accounted for fewer than 10 per cent of the severe COVID-19 cases that occurred after full vaccination.

The data also shows that all deaths that occurred after breakthrough cases were in people over the age of 50, with the 70-plus age group accounting for the most deaths. 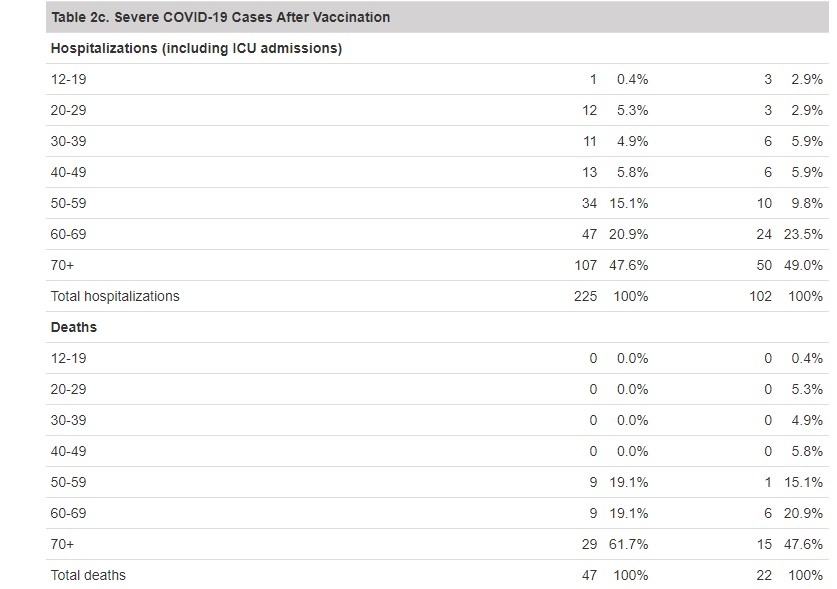 The provincial data provides insight into which variants of concern are infecting fully vaccinated individuals.

It shows nearly 15 per cent of breakthrough cases had the Delta variant, while 5.2 per cent had the Alpha variant.

According to provincial data, about half of the fully vaccinated cases had an unspecified variant of concern, and less than one per cent total had the Delta Plus, Beta, Kappa, and Gamma variants.

Just under 30 per cent of the breakthrough COVID-19 cases were not infected by variants of concern.

The numbers also show that 56 per cent of the fully vaccinated infections were females, while 44 per cent were males.

A chart that shows how many of the breakthrough cases were in males and females. (Source: Manitoba government respiratory surveillance report)

Cases after vaccination account for two per cent of the total cases since the start of the pandemic.